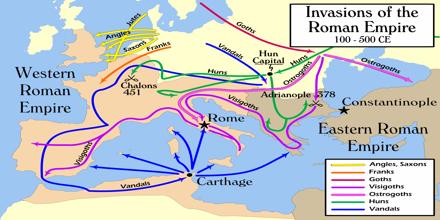 Migration Period was a period of human migration that occurred roughly between the years 300 to 700 CE in Europe, marking the transition from Late Antiquity to the Early Middle Ages. It was also called the Barbarian Invasions. This period was marked by profound changes both within the Roman Empire and beyond. Migration Period was  may be divided into two phases: the first phase, between 300 and 500 A.D. and the second phase, between 500 and 700 AD. Migrating peoples during this period included the Goths, Vandals, Bulgars, Alans, Suebi, Frisians, and Franks, among other Germanic and Slavic tribes.