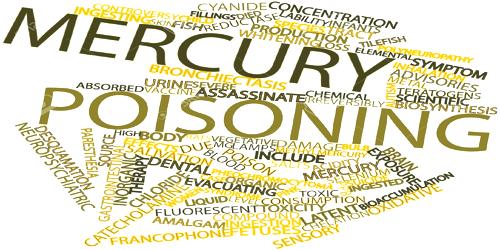 Mercury poisoning is the ill effects on human’s nervous system and other bodily systems due to the over-exposure of mercury. Mercury is a neurotoxin, meaning it affects the nervous system.

Mercury poisoning is a disease caused by exposure to mercury or its toxic compounds. Mercury is a cumulative heavy metal poison which occurs in its elemental form, inorganically as salts, or organically as organ mercury compounds; the three groups vary in effects due to differences in their absorption and metabolism, among other factors. However, with sufficient exposure all mercury-based toxins damage the central nervous system and other organs or organ systems such as the liver or gastrointestinal tract.

Symptoms of mercury poisoning in humans:

2. Oral Cavity problems: Inflammation of the mouth, loss of bone around teeth, ulcerated gums and other areas in the mouth, loose teeth, darkening of gums, taste of metal, bleeding of gums.

Mercury poisoning is caused by sufficient exposure to elemental mercury or mercury compounds.mercury poisoning can be caused by any number of methods of exposure. Amalgam dental fillings are a main cause, other causes are eating fish that have been exposed to mercury in the environment, industrial and work place exposures such as those in the paint industry.
Some other sources of mercury are cosmetics.

Mercury toxicity may occur when a person is exposed to toxic amounts of mercury due to:

Mercury toxicity may occur when a person is exposed to toxic amounts of mercury due to:

How the Body Gets Rid of Mercury

Disposal of the body’s burden of mercury is via the urine and faces, although minute amounts are detectable in expired air. Excretion via the liver occurs in bile and reabsorption of some of this mercury does take place. However, the kidney is equipped with an efficient, energy-dependant mechanism for disposing of metals such as mercury.

Kidney tissue contains a thiol-rich protein called metallothionein; exposure to toxic metals triggers the production of this protein which binds tightly to the metal, retaining it in the kidney tissue in a relatively harmless form. As long as the kidney’s capacity for production of metallothionein is not overwhelmed, mercury excretion can eventually balance intake, thereby limiting worsening of symptoms. However, acute high doses of mercury, or an increase in the chronic dose level can readily precipitate renal failure, one of the classic symptoms of mercury poisoning.

It has been estimated that the ordinary American is exposed to tap water containing heavy metals at levels exceeding the safe upper limit.

Arsenic has been found in tap water in levels substantially exceeding the EPA safe limit in several areas of the country.

Toxicity from eating contaminated fish: This is one of the main sources of mercury poisoning and one which is attracting a great deal of recent attention.

The FDA is coming under increasing pressure from environmental groups to warn the public of the dangers of eating tuna because it contains enough mercury to damage a developing fetus.

Mercury Toxicity from dental fillings: Dental amalgams, or “silver fillings” contains about 50% mercury along with silver, tin, copper and zinc. Mercury tends to leach from the amalgam with release of mercury vapor so over time there is a real risk of a toxic load to the body posing a real health risk.

This is one of the most topical issues on mercury toxicity. A little known fact before public awareness campaigns started is the fact that the preservative, thimerosal usually added to vaccines contain mercury.

Many acute health effects are associated with exposure to high levels of elemental mercury vapor. Respiratory symptoms may predominate (cough, sore throat, shortness of breath). Gastrointestinal effects are frequent in the initial set of symptoms (metallic taste, nausea, vomiting, diarrhea, abdominal pain) as are CNS effects such as headache, weakness, and visual disturbances. Children do not always respond to chemicals in the same way that adults do. Different protocols for managing their care may be needed.

Cardiovascular: Acute inhalation of high levels of elemental mercury vapor can cause tachycardia and hypertension.

Dermal: Dermal reactions associated with dermal contact with liquid elemental mercury or the vapor are rare.

Chelation therapy involves putting a chemical, or chelating agent, into the bloodstream. The chelating agent combines with mercury to help remove it from the body. Chelating agents may be given by pill or by injection.

For recent ingestion, the doctor may induce vomiting, pump out the stomach (gastric lavage), or give polythiol resins to bind with the mercury.

To help reduce your chances of getting mercury toxicity, take the following steps: