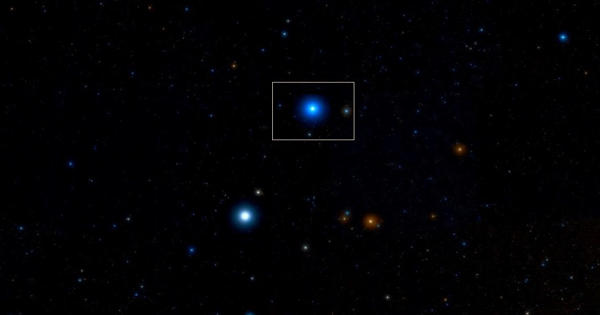 Lalande 21185 – a red dwarf in the constellation of Ursa Major

Lalande 21185 is a red dwarf in the constellation of Ursa Major. It is the apparent brightest red dwarf in the northern hemisphere. It is not part of the Ursa Major constellation outline but is within the borders of the constellation. Although relatively close by, it is only magnitude 7 in visible light and thus is too dim to see with the unaided eye. It is a star in the Alpha Quadrant that was located approximately eight light-years from Sol. The star is visible through a small telescope.

Lalande 21185 is a typical type-M main-sequence star (red dwarf) with about 46% of the mass of the Sun and is much cooler than the Sun at 3,828 K. This star generated considerable excitement in 1996 when the discovery of associated planets was announced. It is intrinsically dim with an absolute magnitude of 10.48, emitting most of its energy in the infrared. This cool and dim, main sequence red dwarf has about 46 percent of Sol’s mass, 46 percent of its diameter, but less than 6/1,000th of its brightness.

Lalande 21185 is a high-proper-motion star moving at about 5 arc seconds a year in an orbit perpendicular to the plane of the Milky Way. The proportion of elements other than hydrogen and helium is estimated based on the ratio of iron to hydrogen in the star when compared to the Sun. The star is less enriched in elements heavier than hydrogen (“metals”) compared to our Sun, with around 63 percent of Sol’s abundance of iron. The logarithm of this ratio is −0.20, indicating that the proportion of iron is about 10−0.20, or 63% of the Sun. Although Lalande 21185 is almost 200 times dimmer than the Sun, it is among the brightest red dwarfs in the solar neighborhood. The surface gravity of this relatively compact star is approximately 65 times greater than the gravity at Earth’s surface (log g = 4.8 cgs), which is more than twice the surface gravity of our Sun.

Because of its proximity, it is a frequent subject for astronomical surveys and other research. It is known by other designations, such as BD+36 2147, Gliese 411, and HD 95735. The star can not be seen by the naked eye, you need a telescope to see it.