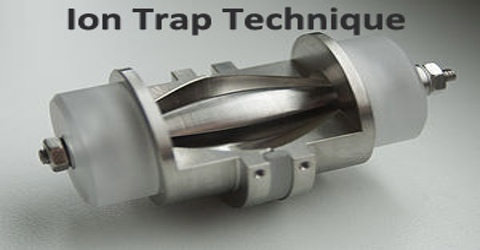 It is now more than 20 years since the first reviews of ion traps appeared (Dehmelt 1967, 1969). Since that time, the ion trapping technique has been applied to many different kinds of problems in physics, ranging from precise RF spectroscopy to studies of the anisotropy of space, and from the crystallisation of an ion cloud plasma at mK temperatures to the quantum mechanics of a single ion interacting with the radiation field.

An ion trap is an electrode structure which, by the application of AC and/or DC potentials, possibly with the addition of a magnetic field, is able to confine the motions of charged particles to a small region of space. These charged particles are generally electrons or singly charged ions; however, some of the earliest experiments were performed with charged aluminium particles and currently there are proposals to make measurements on fully stripped and hydrogen-like uranium. In the rest of this review the word ‘ion’ will be used to refer to any charged particle in a trap. Penning traps can be used for precise magnetic measurements in spectroscopy. Studies of quantum state manipulation most often use the Paul trap. This may lead to a trapped ion quantum computer and has already been used to create the world’s most accurate atomic clocks. Electron guns (a device emitting high-speed electrons, used in CRTs) can use an ion trap to prevent degradation of the cathode by positive ions. Mass spectrometry, the science and technology of gaseous ions, has as its basis the measurement of mass-to-charge ratios (m/z) of ions. All atomic and molecular ions are, in principle, accessible by mass spectrometry, making it a universal method for chemical analysis. Its implementation requires suitable methods of ion generation, ion analysis, and ion detection. An ion trap mass spectrometer may incorporate a Penning trap (Fourier transform ion cyclotron resonance), Paul trap or the Kingdon trap. The Orbitrap, introduced in 2005, is based on the Kingdon trap. Other types of mass spectrometers may also use a linear quadrupole ion trap as a selective mass filter. For experiments with ions confined in a Paul trap, minimization of micromotion is often essential. In order to diagnose and compensate micromotion we have implemented a method that allows for finding the position of the radio-frequency (rf) null reliably and efficiently, in principle, without any variation of direct current (dc) voltages.

In order to faithfully detect the state of an individual two-state quantum system (qubit) realized using, for example, a trapped ion or atom, state selective scattering of resonance fluorescence is well established. The simplest way to read out this measurement and assign a state is the threshold method. The detection error can be decreased by using more advanced detection methods like the time-resolved method or the π-pulse detection method. These methods were introduced to qubits with a single possible state change during the measurement process. Ion traps have been used in low energy atomic physics experiments for a period of roughly 30 years, however, the technique of laser cooling and compression has greatly increased the potential use of stored ions in a number of applications. One example is time and frequency standards. With the technique of laser cooling and compression, ion temperatures less than 10 mK, densities a factor of 10 less than the Brillouin limit (defined below), and essentially indefinite confinement times have been obtained. Unfortunately, elementary charged particles (electrons, positrons, protons, etc.) cannot be directly laser cooled.

The technique of laser cooling utilizes the resonant scattering of laser light by atomic particles. By directing a laser beam at the ion plasma we can decrease the thermal velocity of an ion in a direction opposite to the laser beam. The laser is tuned to the red, or low frequency side of the atomic “cooling transition” typically an electric dipole transition.

In addition the number of atomic ion species that can be directly cooled by a laser is limited. Sympathetic cooling, where one charged species is cooled by the Coulomb interaction with a second, directly cooled species, provides a means of transferring the desirable properties of a laser cooled ion species to a species, such as positrons, which can not be laser cooled directly. The idea of sympathetic cooling is general and can, in principle, be used with any type of trap. The invention of the 3D quadrupole ion trap itself is attributed to Wolfgang Paul who shared the Nobel Prize in Physics in 1989 for this work. The trap consists of two hyperbolic metal electrodes with their foci facing each other and a hyperbolic ring electrode halfway between the other two electrodes. Ions are trapped in the space between these three electrodes by the oscillating and static electric fields.