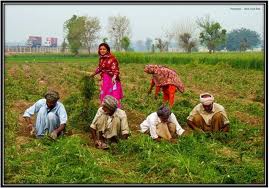 How the government can Maximizes Agricultural Income Tax

Agriculture is the cultivation of animals, plants, fungi and other life forms for food, fiber, and other products used to sustain life. Agriculture was the key implement in the rise of sedentary human civilization, whereby farming of domesticated species created food surpluses that nurtured the development of civilization. The study of agriculture is known as agricultural science. Agriculture is also observed in certain species of ant and termite.

Most Bangladeshis earn their living from agriculture. Although rice and jute are the primary crops, wheat is assuming greater importance. Tea is grown in the northeast. Because of Bangladesh’s fertile soil and normally ample water supply, rice can be grown and harvested three times a year in many areas. Due to a number of factors, Bangladesh’s labor-intensive agriculture has achieved steady increases in food grain production despite the often unfavorable weather conditions. These include better flood control and irrigation, a generally more efficient use of fertilizers, and the establishment of better distribution and rural credit networks. With 35.8 million metric tons produced in 2000, rice is Bangladesh’s principal crop (a)  In which process is carried on to render marketable any such produce aforesaid;

From this above definition we easily understand that any income derived from any land or building in Bangladesh that are used for agricultural purposes will be consider under the head ‘’Agricultural Income”.

Agricultural income can be classified into following categories:

The following incomes are fully considered as agricultural income.

The following incomes are partly considered as agricultural income.

40% of such income was derived from business and

Other 60% income was considered as agricultural income

40% income will be considered as business income

And other 60% income will consider as agricultural income.

According to the income tax ordinance 1984.

Unlike income from tea garden and rubber garden , income from sugar mill and tobacco is also consider as partly agricultural income  if the both case the farmer and the manufacturer are the same person. So in both case ratio will be-

40% income will be considered as business income

And other 60% income will consider as agricultural income.

In addition above sources of incomes, the following income are also considered under the head ‘’agricultural income’’

Income from sale of palm juice and Date juice

Income from sale of seeds and grass, if growth by human effort

Income from any system of sharing of crop

Income from sale of herbal or medical plant

Income from cultivate flower and fruits

Income from poultry farm if they are reared in agricultural land.

Where the book of account in respect such account are not properly maintained,production cost will not be the amount claimed by the assessee rather it will be 60% of the market value of the produce.

How the government can maximizes agricultural income tax

kind of inequality because

ü  Tax holiday should be closed because if government wants to increase these above agricultural product, government can take many other steps which will be more effective  like-providing load without or little interest, training, free seeds and fertilizer etc. Generally farmers will not think about tax before producing something. So the government should remove the tax holiday opportunity.

Other steps can be taken by the government!!!

Other steps can be taken by the government to maximize the agricultural income tax. These steps are given below-

Although Bangladesh is a agricultural country. Most of the people are engage with agriculture. But Bangladesh government does not get tax according to the expectation.    From this above discussion we can understand that in Bangladesh there is lots of exemption in of its tax system. For example, a farmer gets the exemption Tk.50000 if he earn only from agriculture; an indigenous Hillman gets the full exemption if he cultivates in the hill areas; Tax holiday. Besides, there is lot of chance to avoid agricultural tax in Bangladeshi. For example, farmer do not need sale document to show sale and also get 60% production cost of sales if he/she does no maintain book of account which is very high amount that is why if a person has the ability to maintained to keep the account, he does not maintain it. Moreover, farmers have the intensity to avoidance tax. They are not conscious about tax. In the Bangladesh there are some farmers who do not know that agricultural income have tax. If the government wants to maximize the agricultural income tax they need to remove these above lankness.

Collected and Published by  Assignment Point.