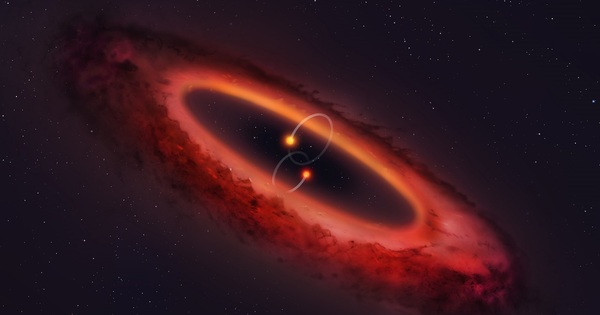 Artwork of the system HD 98000. This is a binary star comprising two sun-like components, surrounded by a thick disc of material. What's different about this system is that the plane of the stars' orbits is inclined at almost 90 degrees to the plane of the disc. The disc could be a remnant asteroid belt, or it could be forming new planets. It is about four time the width of Earth's orbit around the Sun, with a hole in the centre swept out by the stars.

HD 98800 is a multiple-star system located about 150 light years from Earth, right in our section of the Milky Way Galaxy. It is also known as TV Crateris (TV Crt), and it is a quadruple star system in the constellation Crater (the cup). For many years, it has been known that HD 98800 is made up of two pairs of double stars, one of which is surrounded by a disk of dust.

The Hipparcos spacecraft’s parallax measurements put it at a distance of about 150 light-years (45 parsecs), but this value is highly uncertain. Recent data from the Earth-trailing Spitzer Space Telescope in infrared light show that the dust disk has gaps that appear to be cleared by planets orbiting in the disk. The system is located within the TW Hydrae association (TWA), and has received the designation TWA 4.

The system is a member of the TW Hydrae organization, which is made up of young stars. Its inclusion was determined by the fact that its proper motion is similar to that of the other stars in the group. The system itself is thought to be 7-10 million years old.

HD 98800 is a quadruple system, with two pairs of stars orbiting each other. Because the two pairs are separated by over an arcsecond, the wide visual orbit is unknown. A preliminary orbital range has been calculated, with an orbital period of 300 to 430 years and a moderate eccentricity of 0.3 to 0.6.

HD 98800 A is a K-type main-sequence star with a varying radial velocity. This indicates the presence of another star orbiting it, but the light from that star cannot be detected, so the system is a single-lined spectroscopic binary. The secondary system, HD 98800 B, is another spectroscopic binary, but this one is double-lined because both stars (another K-type star and a red dwarf) can be directly detected. The stars in the HD 98800 are much larger than would be expected from their masses: at such a young age, these stars have not condensed into their normal size yet.

Component A has a period of 2.521 days, which is thought to be its rotation period and is classified as an RS Canum Venaticorum variable, which is a dwarf star with an uneven surface brightness that changes brightness as it rotates. Component B is thought to be a T Tauri star, a star in the pre-main sequence surrounded by a disk. It has been speculated that it is actually a post-T Tauri star and that the variations are caused by irregularities in the tilted disk intercepting the light from the star. 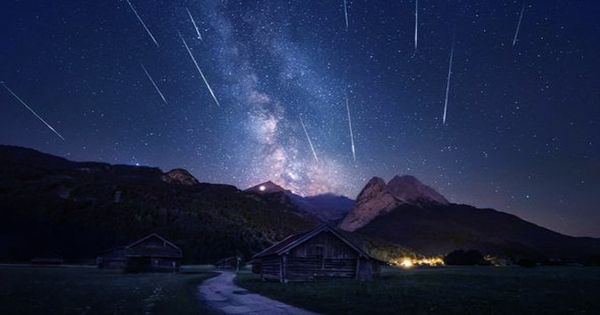 Under Western Australia, There Is A Chunk Of Earth’s Crust That Is 4 Billion Years Old 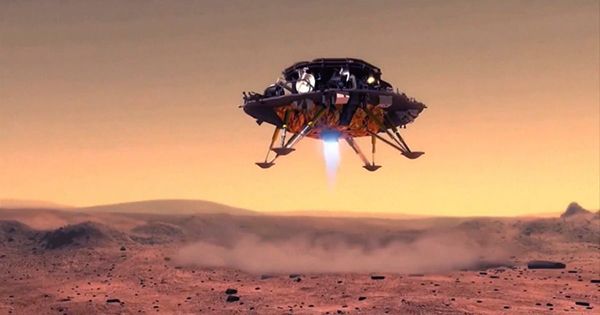