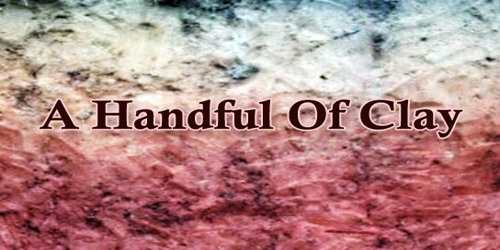 A Handful Of Clay

There was a handful of clay in the bank of a river. It was only common clay, coarse and heavy; but it had high thoughts of its own value and wonderful dreams of the great place which it was to fill in the world when the time came for its virtues to be discovered.

Overhead, in the spring sunshine, the trees whispered together of the glory which descended upon them when the delicate blossoms and leaves began to expand, and the forest glowed with fair, clear colors, as if the dust of thousands of rubies and emeralds were hanging, in soft clouds, above the earth.

The flowers, surprised with the joy of beauty, bent their heads to one another, as the wind caressed them, and said: “Sisters, how lovely you have become. You make the day bright.”

The river, glad of new strength and rejoicing in the unison of all its waters, murmured to the shores in music, telling of its release from icy fetters, its swift flight from the snow-clad mountains, and the mighty work to which it was hurrying the wheels of many mills to be turned, and great ships to be floated to the sea.

Waiting blindly in its bed, the clay comforted itself with lofty hopes. “My time will come,” it said. “I was not made to be hidden forever. Glory and beauty and honour are coming to me in due season.”

One day the clay felt itself taken from the place where it had waited so long. A flat blade of iron passed beneath it, and lifted it, and tossed it into a cart with other lumps of clay, and it was carried far away, as it seemed, over a rough and stony road. But it was not afraid, nor discouraged, for it said to itself: “This is necessary. The path to glory is always rugged. Now I am on my way to play a great part in the world.”

But the hard journey was nothing compared with the tribulation and distress that came after it. The clay was put into a trough and mixed and beaten and stirred and trampled. It seemed almost unbearable. But there was consolation in the thought that something very fine and noble was certainly coming out of all this trouble. The clay felt sure that, if it could only wait long enough, a wonderful reward was in store for it.

Then it was put upon a swiftly turning wheel, and whirled around until it seemed as if it must fly into a thousand pieces. A strange power pressed it and moulded it, as it revolved, and through all the dizziness and pain it felt that it was taking a new form.

Then an unknown hand put it into an oven, and fires were kindled about it–fierce and penetrating–hotter than all the heats of summer that had ever brooded upon the bank of the river. But through all, the clay held itself together and endured its trials, in the confidence of a great future. “Surely,” it thought, “I am intended for something very splendid, since such pains are taken with me. Perhaps I am fashioned for the ornament of a temple, or a precious vase for the table of a king.”

At last the baking was finished. The clay was taken from the furnace and set down upon a board, in the cool air, under the blue sky. The tribulation was passed. The reward was at hand.

Close beside the board there was a pool of water, not very deep, nor very clear, but calm enough to reflect, with impartial truth, every image that fell upon it. There, for the first time, as it was lifted from the board, the clay saw its new shape, the reward of all its patience and pain, the consummation of its hopes a common flower-pot, straight and stiff, red and ugly. And then it felt that it was not destined for a king’s house, nor for a palace of art, because it was made without glory or beauty or honor; and it murmured against the unknown maker, saying, “Why hast thou made me thus?”

Many days it passed in sullen discontent. Then it was filled with earth, and something–it knew not what but something rough and brown and dead-looking, was thrust into the middle of the earth and covered over. The clay rebelled at this new disgrace. “This is the worst of all that has happened to me, to be filled with dirt and rubbish. Surely I am a failure.”

But presently it was set in a greenhouse, where the sunlight fell warm upon it, and water was sprinkled over it, and day by day as it waited, a change began to come to it. Something was stirring within it a new hope. Still it was ignorant, and knew not what the new hope meant.

One day the clay was lifted again from its place, and carried into a great church. Its dream was coming true after all. It had a fine part to play in the world. Glorious music flowed over it. It was surrounded with flowers. Still it could not understand. So it whispered to another vessel of clay, like itself, close beside it, “Why have they set me here? Why do all the people look toward us?” And the other vessel answered, “Do you not know? You are carrying a royal sceptre of lilies. Their petals are white as snow, and the heart of them is like pure gold. The people look this way because the flower is the most wonderful in the world. And the root of it is in your heart.”

Then the clay was content and silently thanked its maker, because, though an earthen vessel, it held so great a treasure.