Home Other Glycogen – a polysaccharide 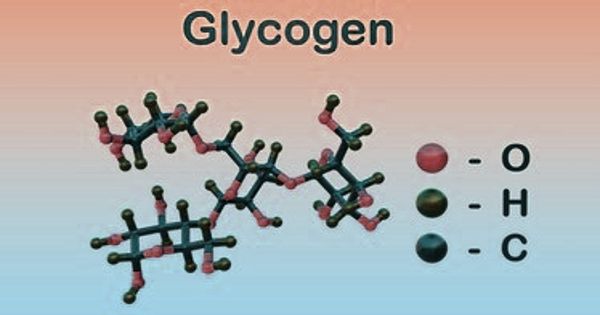 Glycogen is a polysaccharide that is the principal storage form of glucose in animal cells. It is a multibranched polysaccharide of glucose that serves as a form of energy storage in animals, fungi, and bacteria. It is found in the form of granules in the cytosol/cytoplasm in many cell types, and plays an important role in the glucose cycle. It is a very large, branched polymer of glucose residues that can be broken down to yield glucose molecules when energy is needed.

Glycogen is a white amorphous powder, poorly soluble in water, and readily hydrolyzed by mineral acids to yield glucose residues. It is a large, branched polysaccharide that is the main storage form of glucose in animals and humans.

Glycogen is found in the form of granules in the cytosol in many cell types, and plays an important role in the glucose cycle. It functions as one of two forms of energy reserves, glycogen being for short-term and the other form being triglyceride stores in adipose tissue (i.e., body fat) for long-term storage. It is in muscle, liver, and fat cells is stored in a hydrated form, composed of three or four parts of water per part of glycogen associated with 0.45 millimoles (18 mg) of potassium per gram of glycogen.

Glycogen is a glucose polysaccharide occurring in most mammalian and nonmammalian cells, in microorganisms, and even in some plants. It is a branched biopolymer consisting of linear chains of glucose residues with an average chain length of approximately 8–12 glucose units and 2,000-60,000 residues per one molecule of glycogen.

Due to the way glycogen is synthesised, every glycogen granule has at its core a glycogenin protein.

Only the glycogen stored in the liver can be made accessible to other organs. It is not as reduced as fatty acids are and consequently not as energy rich.