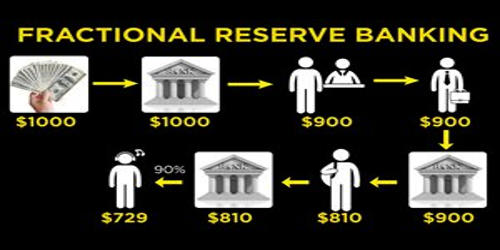 Fractional reserve banking is a system in which only a fraction of bank deposits are backed by actual cash on hand and available for withdrawal. It is the most common form of banking practiced by commercial banks worldwide. It is a banking system in which banks only hold a fraction of the money their customers’ deposits as reserves. It involves banks accepting deposits from customers and making loans to borrowers while holding in reserve an amount equal to only a fraction of the bank’s deposit liabilities.

Bank reserves are held as cash in the bank or as balances in the bank’s account at the central bank. This gives commercial banks the power to directly affect the money supply. This process essentially creates money and thus increases the money supply. The minimum amount that banks are required to hold in liquid assets is determined by the country’s central bank and is called the reserve requirement or reserve ratio. Banks usually hold more than this minimum amount, keeping excess reserves. It is important to note, however, that even though new money is created, the overall wealth in the economy remains unchanged.

Fractional reserve is a banking system that allows commercial banks to profit by loaning part of their customers’ deposits, while just a small fraction of these deposits are stored as real cash and available for withdrawal. Bank deposits are usually of a relatively short-term duration while loans made by banks tend to be longer-term – this requires banks to hold reserves to provide liquidity when deposits are withdrawn. Banks, working on the expectation that only a proportion of depositors will seek to withdraw funds at the same time, keep only a fraction of their liabilities as reserves. Thus, they can experience an unexpected bank run, when depositors wish to withdraw more funds than the reserves held by the bank.

The fractional reserve banking system was created around 1668 when the Swedish (Sveriges) Riksbank was established as the first central bank in the world – but other primitive forms of fractional reserve banking had already been in use. The idea that money deposits could grow and expand, stimulating the economy through loans, quickly became a popular one. It made sense to use the available resources to encourage spending, rather than hoard them in a vault.

By taking on a loan, borrowers get more money, but at the same time they are also taking on more debt. So at the end of the day, they are not richer than before. Money that would otherwise be idle in bank accounts is circulated, and funds from small deposits are pooled to make loans. In other words, an increase in money supply only results in a higher level of liquidity, but it does not make the economy wealthier at all.