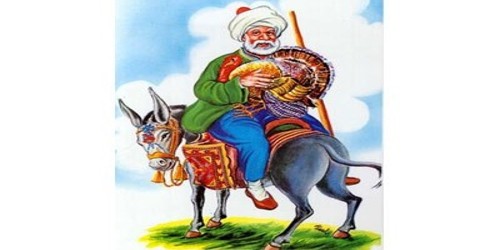 Long ago, a hermit was walking through a bleak desert land when he happened to spot a cave. The hermit had been walking for a long time and was exhausted from the hot sun, so he decided he would go inside the cave to rest.

He crept through the small opening, and inside he was surprised to see the cave was as bright as day. The light, he saw, came from a source at the center of the cave. He scrambled to see what it could be.

“Oh,” he gasped, for there before he was a huge pile of golden coins, so large and bright that they lighted up the whole cave.

The hermit at once turned around and stumbled out of the cave. When he was outside, he began running. He ran as fast as he could down the road.

Soon the hermit passed a rocky ridge. He did not know that three robbers were hiding just behind the rocks. The robbers spent their days and nights lying in wait for travelers. When anyone happened past, the robbers would jump out and steal all his belongings.

But the robbers were surprised to see the hermit, for he was running as fast as could and looking over his shoulder as if something were chasing him. And yet he carried nothing at all!

Still, the chief robber was curious, and so he jumped from his hiding place into the hermit’s path. “Why are you running so fast?” he asked the hermit. “You look as if you’ve seen a ghost.”

“I am running away from evil,” the hermit answered, breathlessly. “Evil is chasing me, and I am running as fast as I can so that it doesn’t catch me.”

Now the other two robbers jumped out from behind the ridge, and all three men looked down the path. They stared, they squinted, they searched. But they say nothing at all. They began to laugh. “There’s nothing behind you,” the chief robber said.

“Why don’t you show us what it is that’s chasing you?” the second robber suggested. And the third robber nodded. “We see nothing, so I suppose you had better show us. It’s important to recognize evil.”

“That it is,” the hermit said, “and so I will show you.” He began to tremble at the thought, but he was a kind and generous man and hoped to protect everyone from evil. And so he turned around, beckoned with a finger and a heavy heart, and began to walk back toward the cave. The robbers followed close behind.

When they reached the entrance to the cave, the hermit nodded. “There it is, but please, I beg you, don’t go in there.”

“Sir,” the first robber said gently, “I must see what has frightened you so. Won’t you show us evil?”

Naturally, the robbers were delighted, and they assumed the old man was simply mad. “Never fear,” said the chief robber. “You go on your way. We’ll take care of this.”

Relieved to be set free, the hermit slipped away, and the robbers burst into delighted laughter. “Now,” said the chief robber, “we must decide what we shall do with our gold.”

The three men sat around discussing the problem, for they did not want to leave the treasure. They feared the hermit might lead someone else to the cave. And they were too hungry and weak to carry so much gold.

They decided that one of them should take a little of the gold to the city. There he would buy food and drink, and when he returned and they had regained their strength from a feast, the three would divide up the rest and carry it away.

The third robber said, “I’ll go,” but he was thinking that while he was in the city, he would eat all he wished to eat; then he would poison the rest of the food. When his companions ate the poisoned food, they would die, and all the gold would be his.

Off he went, coins jingling in his pockets, a smile on his face.

Meanwhile, the two men in the cave decided that as soon as their comrade returned, they would kill him, eat the food, and divide his share of gold between the two of them.

When the third robber returned with the food, the two others attacked him and stabbed him to death. Then they ate all the food. Soon afterward, they died, too.

And so the hermit was right all along. And the treasure remains untouched and hidden deep inside that cave.

While this particular version is Sufi in origin, the tale is found in many different countries. It was the basis, for instance, for Geoffrey Chaucer’s “The Pardoner’s Tale” in his Canterbury Tales.