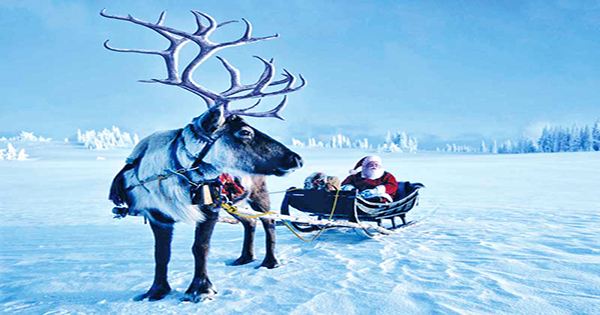 We all know that without his magical reindeer, Father Christmas would have a difficult time delivering gifts to everyone on the planet. However, why they picked above any other animal to draw the sleigh? Reindeer’s biology, it turns out, makes them excellent for the task. The following are five reasons why.

Reindeer reside in the Arctic, where temperatures may drop below -30°C on long winter nights. Reindeer, unlike other animals, have two layers of fur: a thick underfur under a covering of hollow guard hairs. Reindeer hair may contain up to 2,000 hairs per square cm, making it 10 times denser than a human hair.

This second covering traps air and provides insulation, preventing the reindeer from losing heat and preventing snow from reaching and chilling the skin. This keeps reindeer warm, whether they are residing at the North Pole with Santa or traveling across the world on Christmas Eve.

Furthermore, as blood reaches our extremities, such as our fingers and toes, it cools, requiring our hearts to pump harder in order to warm the blood back up; This necessitates a lot of energy, which humans receive from food, which is typically scarce in Arctic regions — unless you include the elves gorging on candy canes and sugarplums.

Reindeer, on the other hand, have a counter-current heat exchange, which allows them to recycle heat, reducing the amount of effort the heart has to do. Intertwined arteries and veins convey blood to and from the heart, allowing heat from heated arterial blood to transfer to cold venous blood.

A large portion of the heat exchange occurs in the reindeer’s specialized nasal bones, where cold air is inhaled via the nostrils. Reindeer, like Rudolph, have a crimson nose because of the extremely concentrated blood veins in their noses.

Reindeer lichen, a symbiotic interaction between algae and fungus that forms an organism, is the principal food source for reindeer throughout the winter. Lichens are crusty-looking organisms that may found on tree trunks and rocks. Lichens are abundant in the Arctic, making them an excellent food source for reindeer. This means that, unlike many other animals, reindeer don’t need to accumulate body fat and, unlike many others, can find enough food to fuel their epic sleigh voyage with Santa — aided, of course, by the carrots humans lay out. Reindeer, because of specialized bacteria in their guts, are the only animals capable of digesting lichen.

Due of the limited amount of sunshine available in the Arctic during the winter, reindeer have evolved to see as much as possible in the dark. In the winter, reindeer eyes change color from gold to blue, allowing more light into their eyes and increasing their vision. Reindeer have the ability to see in the ultraviolet. Although birds and insects have developed this incredible sense, reindeer are among the few mammals that have developed it. This means that items that would be lost in the background to human vision are significantly more noticeable to reindeer. Because reindeer can see in the dark, they are ideal for guiding Santa on his nighttime journey and ensuring that he is not seen, children.

Reindeer have evolved broad, crescent-shaped hooves to tread on snow without sinking or suffering frostbite. These not only keep them stable but also are used as shovels to dig beneath the snow for lichen. Over the winter, the reindeer’s footpads shrink and harden, allowing them to walk on the sharp edges of their hooves. The hoof rims cut through the ice and snow to minimize sliding as well as limiting the area of the hoof exposed to the chilly ground. Naturally, this is an excellent adaption for reindeer landing on snowy rooftops.

Reindeer are the only domesticated deer species, and they have been used for transportation since the Stone Age. People, like Santa, ride on their backs like horses and utilize small herds of them to pull sleds. Reindeer can travel up to 5,000 kilometers per year, which is more than any other land mammal, and they regularly cover 55 kilometers per day. They are also shockingly quick, reaching speeds of up to 80 km/h. This long-distance excursion is great for assisting Father Christmas in visiting all of the children in one night.

As a result, reindeer can remain warm, see in the dark, stay upright on slick surfaces, and find sustenance in the harshest of conditions — all of which are essential qualities for completing the most important night’s job on Christmas Eve. Because of their domestication and long association with people, they are also used to hauling sleighs. Santa’s reindeer, of course, fly. Unlike all the other adaptations, they cannot thank evolution for that. Their power to fly is due to a dusting of magical Christmas dust, as we all know.