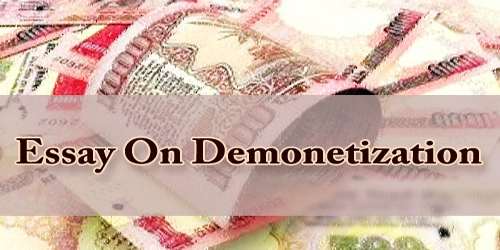 Introduction: Demonetization is the act of stripping a currency unit of its status as legal tender. Many governments across the world have taken this measure to curb black-market and stop counterfeiting of currency notes. While some countries were successful, others failed miserably in their goals behind demonetization. It occurs whenever there is a change of national currency. The current form or forms of money is pulled from circulation and retired, often to be replaced with new notes or coins. Sometimes, a country completely replaces the old currency with new currency.

Removing the legal tender status of a unit of currency is a drastic intervention into an economy because it directly effects the medium of exchange used in all economic transactions. It can help stabilize existing problems, or it can cause chaos in an economy, especially if undertaken suddenly or without warning. That said, demonetization is undertaken by nations for a number of reasons.

Understanding Demonetization: Demonetization has been used to stabilize the value of a currency or combat inflation. The Coinage Act of 1873 demonetized silver as the legal tender of the United States, in favor of fully adopting the gold standard, in order to stave off disruptive inflation as large new silver deposits were discovered in the American West. Several coins, including a two-cent piece, three-cent piece, and half-dime were discontinued. The withdrawal of silver from the economy resulted in a contraction of the money supply, which contributed to a recession throughout the country. In response to the recession and political pressure from farmers and from silver miners and refiners, the Bland-Allison Act demonetized silver as legal tender in 1878.

The United Kingdom in 1971 – This was when the British adopted the decimal system, and the pound was divided into 100 pence. This was done after three years of spreading awareness and education campaign. The transition to decimal currency was a success in Britain.

African Countries – Ghana and Nigeria tried demonetization in 1982 and 1984 respectively. Ghana wanted to curb tax evasion and corruption, whereas Nigeria desired to fix the debt-ridden economy. Both were unsuccessful, and it resulted in a further weakening of the economy.

The Zimbabwean government demonetized its dollar in 2015 as a way to combat the country’s hyperinflation, which was recorded at 231,000,000 percent. The three-month process involved expunging the Zimbabwean dollar from the country’s financial system and solidifying the U.S. dollar, the Botswana pula, and the South African rand as the country’s legal tender in a bid to stabilize the economy. Before this, Zimbabwe had a currency denomination of one hundred trillion Zimbabwean dollars.

Soviet Union – In 1991 Mikhail Gorbachev led the decision to withdraw 50 and 100 ruble notes. As a consequence, the economy collapsed and even resulted in the break-up of the USSR.

Australia – The Australian government was the first to introduce plastic notes in 1992. In 1996, Australia decided to replace all paper notes by plastic currency to fix the menace of counterfeiting. As polymer-based notes were already in use for four years, the transition was smooth and didn’t have any impact on the economy.

Some other countries have demonetized currencies in order to facilitate trade or form currency unions. An example of demonetization for trade purposes occurred when the nations of the European Union officially began to use the euro as their everyday currencies in 2002. When the physical euro bills and coins were introduced, the old national currencies, such as the German mark, the French franc, and the Italian lira were demonetized. However, these varied currencies remained convertible into Euros at fixed exchange rates for a while to assure a smooth transition.

Conclusion: For the tech-savvy people, demonetization didn’t have much impact. But, it was the poor and the small businessmen who were affected the most. After demonetization, the income tax filing and collection became higher. This means more people came into the financial system and became accountable. In the past, demonetization has been a gradual process or was taken as a responsive measure to war, hyperinflation, currency crisis, etc. Venezuela had to take demonetization back after strong protests by the people. So, we can say that many people in our country felt that the intentions behind the demonetization were good and required for our welfare and progress.