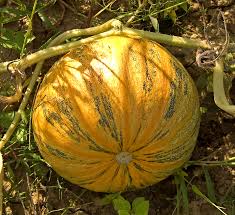 Cucurbita (Latin for gourd) is a genus of herbaceous vine in the gourd family Cucurbitaceae, also known as cucurbits, native to the Andes and Mesoamerica. Five species are grown worldwide for their edible fruit, variously known as squash, pumpkin, or gourd depending on species, variety, and local parlance, and seeds. First cultivated in the Americas before being brought to Europe by returning explorers after their discovery of the New World, plants in the genus Cucurbita are important sources of human food, beverages, and oil. Other kinds of gourd, also called bottle-gourds, are native to Africa and belong to the genus Lagenaria, which is in the same family and subfamily as Cucurbita but in a different tribe. These gourds are used as utensils or vessels.

Most Cucurbita species are herbaceous vines that grow several meters in length and have tendrils, but non-vining “bush” cultivars of C. pepo and C. maxima have also been developed. The yellow or orange flowers on a Cucurbita plant are of two types: female and male. The female flowers produce the fruit and the male flowers produce pollen. Many North and Central American species are visited by specialist bee pollinators, but other insects with more general feeding habits such as honey bees also visit. The fruits of the Cucurbita genus are good sources of several nutrients such as vitamin A, vitamin C, niacin, folic acid, and iron, and like all plant products are free of cholesterol. The plants contain the toxins cucurbitin, cucurmosin, and cucurbitacin. There is some disagreement about how to handle the taxonomy of the genus; the number of species accepted by different specialists varies from 13 to 30. In addition, the ancestry of some of the species that have been cultivated for millennia is uncertain. The five domesticated species are Cucurbita argyrosperma, C. ficifolia, C. maxima, C. moschata, and C. pepo. All of these can be treated as winter squash because the full-grown fruits can be stored for months; however, C. pepo includes some cultivars that are better used only as summer squash.

Cucurbita fruits have played a role in human culture for at least 2,000 years. They are often represented in Moche ceramics from Peru. After Christopher Columbus’s arrival in the New World, paintings of squashes started to appear in Europe early in the sixteenth century. Among other uses, extracts are used in cosmetics for dry and sensitive skin. The fruits have many culinary uses including pumpkin pie, biscuits, bread, desserts, puddings, and soups. Pumpkins and other Cucurbita fruits are celebrated in festivals and in flower and vegetable shows in many countries.

Most Cucurbita species are climbing annual vines; they are also mesophytes, plants which require a more or less continuous water supply. The less numerous perennial species grow in tropical zones and are xerophytes, plants which tolerate dry conditions. Growing 5 to 15 meters (16 to 49 ft) in height or length, the plant stem produces tendrils to help it climb adjacent plants and structures or extend along the ground. Most species do not readily root from the nodes; a notable exception is C. ficifolia, and the four other cultivated mesophytes do this to a lesser extent. The vine of the perennial Cucurbita can become semiwoody if left to grow. There is wide variation in size, shape, and color among Cucurbita fruits, and even within a single species. C. ficifolia is an exception, being highly uniform in appearance. The morphological variation in the species C. pepo and C. maximais so vast that its various subspecies and cultivars have been misidentified as totally separate species.