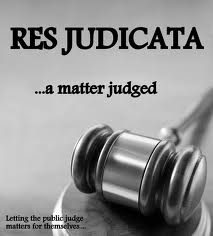 The rule of direct res judicate is limited to a matter actually in issue alleged by one party and either denied or admitted by the other party expressly or impliedly. But the rule of constructive res judicata, and provides that if a plea could have been taken by a party in a proceeding between him and his opponent, he should not be permitted to take that plea against the same party in a subsequent proceeding with reference to the same subject – matter.

The clearly is opposed to considerations of public policy on which the doctrine of res judicata is based and would mean harassment and hardship to the opponent. Besides, if such a course is allowed to be adopted, the doctrine of finally of judgments pronounced by courts would also be materially affected.

Thus, it helps in raising the bar of res judicata by suitably construing the general principles of subduing a cantankerous litigant. That is why this rule is called constructive res judicata, which, in reality, is an observed by Somervell, L. J. : “ I think that … it would be accurate to say that res judicata ….. is not confined to the issues which the court is actually asked to decide, but that it covers issues or facts which are so clearly part of the subject – matter of the litigation and so clearly could have been raised that it would be an abuse of the process of the court to allow a new proceeding to be started in respect of them.”

If the conditions are satisfied, the adjudication will operate as res judicata between co– defendants.

Estoppel is not the same thing as res judicata. The difference lies in the following points:

Thus it appears that res judicata precludes a man averring the same thing twice over in successive litigations, while estoppel prevents him saying one thing at one time and the opposite at another.

The literal meaning of the maxim lis pendens is a suit under consideration of any court of law. This principle is based on the maxim ‘liti pendete nihil innovetur’ (meaning thereby, nothing can be introduced during the pendency of a suit).

Section 52 of the Transfer of Property Act 1882 which lays down the principle runs as follows:

During the pendency in any Court in Bangladesh of any suit or proceedings which is not collusive and in which any right to immoveable property is directly and specifically in question, the property cannot be transferred or otherwise dealt with any party to the suit or proceeding so as to affect the rights of any other party thereto, under any decree or order which may be made therein, except under the authority of the Court and on such terms as it may impose.

Explanation : For the purpose of this section, the pendency of a suit or proceeding shall deemed to comments from the date of the presentation of the plaint or the institution of the proceeding in a Court of competent jurisdiction, and to continue until the suit of proceedings has been disposed of by a final decree or order and complete satisfaction or discharge of such order has been obtained, or has become unobtainable by reason of the expiration of any period of limitation prescribed for the execution thereof by any law for the time being in force.

1)     The conditions for the application of the doctrine are as follows:

3)     Competency of Court to decide suit or proceeding.

5)     Some right to immovable property must be directly and specifically involved in that suit or proceeding.

6)     One of the parties to the suit must have transferred or disposed of the property.

7)     Such transfer or disposal must affect the rights of the other party.