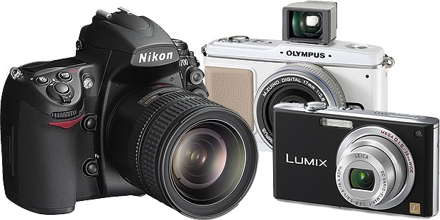 Digital camera is a camera that takes video or still photographs, or both, digitally by recording images on a light-sensitive sensor. Many compact digital still cameras can record sound and moving video as well as still photographs. In the Western market, digital cameras outsell their 35 mm film counterparts. Digital cameras can include features that are not found in film cameras, such as displaying an image on the camera’s screen immediately after it is recorded, the capacity to take thousands of images on a single small memory device, the ability to record video with sound, the ability to edit images, and deletion of images allowing re-use of the storage they occupied.