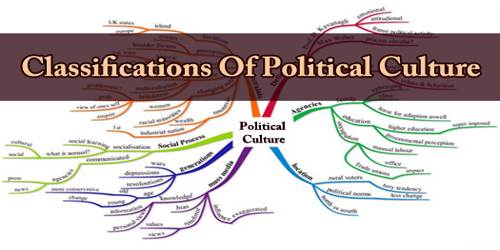 To study the composition of political cultures, it is necessary to classify citizens according to a theoretical typology of political subcultures. Different methods of classification have been used for confronting this challenge, but the choice of method is rarely discussed in any detail because most studies apply a method without considering implications or possible alternatives. This is unfortunate because the choice of method has important consequences for the ensuing results.

Actually, the term ‘Political Culture’ is used in the field of social science. It refers to historically-based, widely-shared beliefs, feelings, and values about the nature of political systems, which can serve as a link between citizens and government.

Different countries have different political cultures, which can help us understand how and why their governments are organized in a certain way, why democracies succeed or fail, or why some countries still have monarchies. Understanding our own political culture can also provide clues to political relationships, such as those we share with each other or our governments.

However, it’s important to understand that political culture differs from political ideology. The term ‘political ideology’ refers to a code of beliefs or views about governments and politics that may influence the way we vote or whether or not we support certain legislative actions.

Therefore the backward develop a political sub-culture of their own. Sub-culture also develops when the political system is unable to advance rapidly according to the fast-changing needs of the society, Sometimes new political structures may be introduced by the elite but certain people may not be able to cope with it.

In this way, different sections of society may have different political orientations. So when a particular section of the society is clearly distinguishable from others in the same political system, then we find that it has developed a distinct political sub-culture of its own, France is the classic example of such sub-cultures.

Almond and Verba wrote that these types of political culture can combine to create the civic culture, which mixes the best elements of each.

Generally, the various groups do not make the same effective contribution in a political system but in times of grave national crisis, they do so. In developing countries also political sub-cultures develop because of the differences of language, religion, class, and caste.

Like in Real Life, Tremendous Emotions on Screen are Motivated by Music