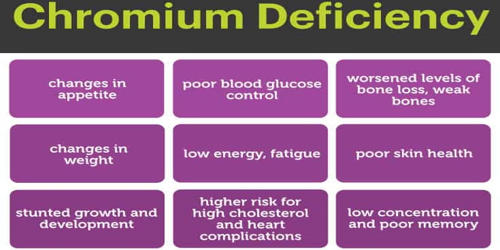 Chromium deficiency is a widespread problem. It is described as the consequence of an insufficient dietary intake of the mineral chromium. It’s one of the most common elements in the earth’s crust and in seawater, but only tiny amounts are present in the human body. Chromium was first proposed as an essential element for normal glucose metabolism in 1959 and was widely accepted as being such by the 1990s. Chromium supplements may enhance muscle mass, weight loss, and glucose control, but researchers are still working to confirm this. It’s wildly popular in the United States as a supplement for weight loss, but it’s not effective in that role. Cases of deficiency were described in people who received all of their nutrition intravenously for long periods of time. Chromium doesn’t naturally occur in the body, so it must be added through diet.

Chromium is an essential trace mineral that can improve insulin sensitivity and enhance protein, carbohydrate, and lipid metabolism. The main reason chromium deficiency is so rare is that this nutrient is found in an abundance of fruits, vegetables, grains, and meat — and even in wine. The essentiality of chromium has been challenged. Whereas the authorities in the European Union do not recognize chromium as an essential nutrient, those in the United States do and identify an adequate intake for adults is between 25 and 45 μg/day, depending on age and sex. Symptoms of a chromium deficiency include a craving for sweets, depression, a decrease in the body’s ability to metabolize glucose and fats, inhibition in the body’s production of protein, etc. In laboratory animals, chromium deficiency is associated with an increase in blood glucose, cholesterol, and triglyceride concentrations.

Severe chromium deficiency is rare because the mineral is present in many foods, including high-fiber bran cereals and other whole-grain products, coffee, nuts, green beans, broccoli, etc. Many people such as diabetics, pregnant women, and the elderly are especially at risk of chromium deficiency leading to impaired insulin function, inhibition of protein synthesis and energy production, and type 2 diabetes and heart disease. Conditions such as diabetes and heart disease increase chromium excretion and therefore increase the amount of chromium needed by the body. Reviews report the changes as modest, and without scientific consensus that the changes have a clinically relevant impact. When the body is under stress, it increases its output of certain hormones that can consequently alter blood sugar balance, creating the demand for more chromium.