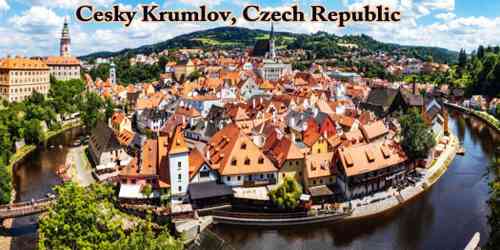 Český Krumlov (Czech pronunciation: ˈtʃɛskiː ˈkrumlof; German: Krumau or Böhmisch Krumau) city, South Bohemia region, southwestern Czech Republic. Situated roughly 15 miles (25 km) southwest of the larger city of České Budějovice, it lies on the Vltava River. The first part of the city’s name, Český, means “Czech,” and the second part, Krumlov, was derived from a German description of the tight bends in the river there.

Its historic center, centered around the Český Krumlov Castle, has been a designated UNESCO World Heritage Site since 1992 and was given this status along with the historic Prague castle district. 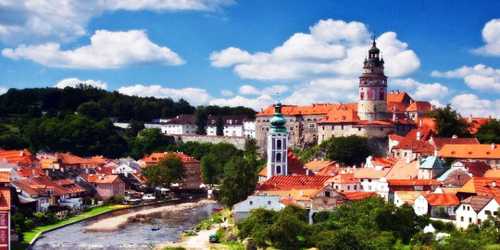 The town’s name begins with Český (“Bohemian”) to differentiate it from Moravský Krumlov in South Moravia. There are plenty of lively bars and riverside picnic spots in summer it’s a popular hang-out for backpackers. It can be a magical place in winter, though, when the crowds are gone and the castle is blanketed in snow.

Český Krumlov is best approached as an overnight destination; it’s too far for a comfortable day trip from Prague. Consider staying at least two nights, and spend one of the days hiking or biking in the surrounding woods and fields.

The Historic Centre of Český Krumlov is an outstanding example of a small Central European medieval town whose architectural heritage has remained intact thanks to its peaceful evolution over more than several centuries. This feudal town, a former center of a large estate owned by powerful noble families who played an important role in the political, economic, and cultural history of Central Europe, was founded in the Middle Ages and underwent Renaissance and Baroque transformations. As it remained almost intact, it has retained its street layout, which is typical of planned medieval towns, as well as many historic buildings including their details such as the roof shapes, the decoration of Renaissance and Baroque facades, vaulted spaces, as well as original layouts and interiors.

The castle features Gothic, Late Gothic, Renaissance, and Baroque elements. It is dominated by the Gothic Hrádek with its round tower; this was subsequently converted into a Baroque residence with the addition of a garden, the Bellaire summer pavilion, a winter riding school, and a unique Baroque theatre in 1766. Latrán (settlement developed to the east) and the town proper contain undisturbed ensembles of burgher houses, the oldest being in the High Gothic style. They are notable for their facades, internal layouts, and decorative detail, and especially carved wooden Renaissance ceilings. Český Krumlov also experienced considerable ecclesiastical development illustrated by the major 15th-century church of St. Vitus and monasteries of various preaching and itinerant orders.

The town name was first mentioned in a letter of Duke Otokar Štýrský in 1253. The town was established essentially in two stages. The first part was built spontaneously below the Krumlov castle, called Latrán, and settled mostly by people who had some administrative connection with the castle. The name and foundation of this part of town is shrouded in legend as well the castle and town were allegedly built in a place where the Vítkovci overcame a nest of bandits that had been kidnapping and thieving. To the memory of the villain´s hiding place, it was called Latrán (Tales and Legends of Český Krumlov). The reality is, however, more prosaic latus in Latin means lateral, side part, and residences below the castle were given this name.

The second part of the town was founded as a typical settlement on a “green meadow”, i.e. in a place where no previous settlement had been. The town subsequently took shape as a typical colonization ground plan with a quadratic square in the center with streets from its corners leading to the town walls. This part of the town and its first Magistrate Šipota were first mentioned in 1274. Since the very beginning of the town, both Czech and German nationalities were represented, occasionally even Italian.

From the Middle Ages to the mid-20th century, the city was populated by a mixture of Czechs and Germans. After the creation of Czechoslovakia in 1918, the Czechoslovak government rejected the German form of the city’s name in favor of the present Czech version, and after World War II the government expelled the German-speaking population. Today tourism is a major economic activity; in addition to hundreds of historic buildings, attractions include local museums, art galleries, theatres, and festivals.

During the Communist era of Czechoslovakia, historic Krumlov fell into disrepair, but since the Velvet Revolution of 1989 much of the town’s former beauty has been restored, and it is now a popular holiday destination, with large numbers of tourists from Europe and from Asian countries such as China and Japan. In August 2002, the town was damaged in a great flood of the Vltava River.

The Historic Centre of Český Krumlov is a property of high authenticity. Its present form and appearance closely reflect the type of town linked to the noble residence since the Middle Ages. The historic center has preserved its original layout, as well as the characteristic castle-city relationship very clearly, thanks to its undisturbed development over several centuries. It remains untouched by the devastating effects of 19th-century industrialization, neglect during the communist era, and thoughtless developments of the past decades. The high degree of authenticity is based on the dramatic setting of the urban townscape and its natural environment, as well as on a large number of preserved historic details. Restoration works on the facades of the buildings are carried out in compliance with strict international standards for heritage conservation. Only traditional materials and techniques are used. 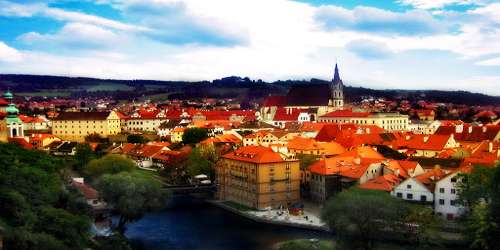 Sights and Culture of Cesky Krumlov –

Most of the architecture of the old town and castle dates from the 14th through 17th centuries; the town’s structures are mostly in Gothic, Renaissance, and Baroque styles. The core of the old town is within a horseshoe bend of the river, with the old Latrán neighborhood and castle on the other side of the Vltava.

Český Krumlov State Castle: Český Krumlov’s striking Renaissance castle, occupying a promontory high above the town, began life in the 13th century. It acquired its present appearance in the 16th to 18th centuries under the stewardship of the noble Rožmberk and Schwarzenberg families. The interiors are accessible by guided tour only, though visitors can stroll the grounds on their own.

Český Krumlov Castle preserves its Baroque theatre, built-in 1680–82 under Prince Johann Christian I von Eggenberg and renovated with up-to-date stage equipment under Josef Adam zu Schwarzenberg from 1765–66. It is one of few such court theaters to retain its original stage machinery, scenery, and props. Due to its age, the theater is only used three times a year (only twice open to the public), when a Baroque opera is performed in simulated candlelight

Egon Schiele Art Centrum: This excellent private gallery houses a small retro­spective of the celebrated and controversial Viennese painter Egon Schiele (1890–1918). Schiele’s mother, Marie Soukupová (1862–1935), was born here and Schiele himself lived in Krumlov in 1911. He raised the ire of the townsfolk by hiring young girls as nude models. The center also houses interesting temporary exhibitions.

Castle Museum & Tower: Located within the castle complex, this small museum and the adjoining tower is an ideal option if you don’t have the time or energy for a full castle tour. Through a series of rooms, the museum traces the castle’s history from its origins to the present day.

Marionette Museum: This is the better of two museums in town dedicated to puppetry and marionettes. It’s a branch of the National Marionette Theatre in Prague and is housed in the former Church of St Jošt. On display is a full range of Czech marionettes and puppets through the ages, including theatres and stage sets.

Regional Museum: This small museum features folk art from the Šumava region, archaeology, history, fine arts, furnishings, and weapons. The highlight is a room-sized model of Český Krumlov c 1800. Just next to the museum is a small grassy area with an amazing view out over the castle.

Church of St Vitus: This pretty church, with its signature neo-Gothic tower, is worth a peek inside. The church occasionally hosts classical music concerts; ask at the nearby tourist office on the main square.

Český Krumlov is close to the Šumava National Park, the Czech Republic’s largest national park. The Šumava Mountains lie along the border with Austria and Germany and offer a range of natural habitats peat bogs, Alpine meadows, old-growth forests, lakes, and rivers. The area is popular with walkers, cyclists, and canoeists on the Vltava. Cesky Krumlov is a short distance from the man-made Lake Lipno, on which many people take boat trips to various small towns and to the dam, with its Hydropower plant.

Český Krumlov hosts a number of festivals and other events each year including the Five-Petaled Rose Festival (a reference to the rose of the Rožmberk crest), which is held on the summer solstice weekend. The downtown area is turned into a medieval town with craftsmen, artists, musicians, and local people in medieval costume. Activities include jousting, fencing, historical dance performances, and folk theater, in the Castle precincts and along the river. It concludes with a fireworks display.

Since the Velvet Revolution in 1989, over eighty restaurants have been established in the area. Many restaurants are located along the river and near the castle. There is a museum dedicated to the semi-precious gemstone Moldavite in the city center.