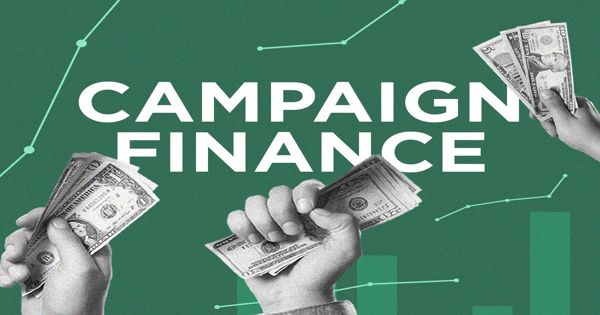 Campaign finance, raising, and spending of money intended to influence a political vote, such as the election of a candidate or a referendum. It is also known as election finance or political donations refers to the funds raised to promote candidates, political parties, or policy initiatives and referenda. Political parties, charitable organizations, and political action committees (in the United States) are vehicles used for fundraising for political purposes. Political parties and candidates require money to publicize their electoral platforms and to pursue effective campaigns.

“Political finance” is also popular terminology, and is used internationally for its comprehensiveness. Campaign finance in the United States is the financing of electoral campaigns at the federal, state, and local levels. Political donations can also refer to funds received by political parties from private sources for general administrative purposes. At the federal level, campaign finance law is enacted by Congress and enforced by the Federal Election Commission (FEC), an independent federal agency.

The main features of a campaign finance system vary considerably across countries. Generally speaking, there are two sources of funds for parties and candidates: public financing and private financing. A more systematic analysis of the electoral fortunes of wealthy candidates found no significant association between electoral or fund-raising success and personal wealth. Related findings abound. For example, large campaign war chests carried over from the previous election do not deter challengers and confer no electoral advantage on incumbents.

Political campaigns involve considerable expenditures, including travel costs of candidates and staff, political consulting, and advertising. Attempts to regulate campaign finance reflect the commonly held belief that uncontrolled political fund-raising and spending can undermine the integrity of the democratic process and erode the confidence of the electorate in political institutions. Campaign spending depends on the region. For instance, in the United States, television advertising time must be purchased by campaigns, whereas in other countries, it is provided for free. Campaign finance raises fundamental ethical questions for democratic regimes.

The need to raise money to maintain an expensive political campaign diminishes ties to a representative democracy because of the influence large contributors have over politicians. Most often, debates about campaign finance revolve around the protection of freedom of expression, and the prevention of corruption, two democratic principles that can enter into conflict with one another. By regulating campaign fund-raising and spending, governments seek to avoid a situation whereby politicians use the power associated with their office to reward large contributors.