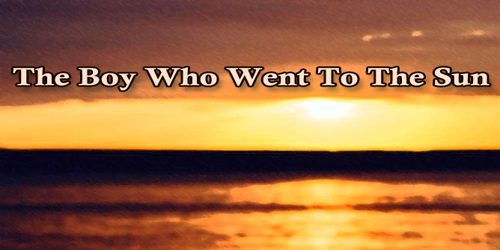 The Boy Who Went To The Sun

Once upon a time, a young boy was raised by his mother. One day, the boy said to his mother, “Tell me who my father is,” but his mother shook her head and said, “You are young, my child. We will talk when you are older.”

A few years passed. Again the boy went to his mother and said, “Mother, tell me who my father is.”

This time the mother looked deep into her son’s eyes and said, “Child, you must go and ask the Sun.”

The boy at once decided he would go to visit the Sun. “But how will I get there?” he said aloud, and a rabbit who was passing by asked, “Where is it you want to go?”

“I wish to visit the Sun,” said the boy.

The boy tossed his concoction into the sky, and it made a path across the sky toward the Sun. This is the path we call the Milky Way today. The boy was thrilled, and without thinking for one moment about the consequences of this great journey, he followed the path west, toward the Sun’s home.

When he arrived at the Sun’s house, he hurried inside without asking permission and he cried, “Tell me, Sun! Who is my father?”

The Sun was stunned at the intrusion. “You are arrogant,” said the Sun. “You have much to learn,” and the boy fell back to Earth.

He was not harmed, but he was shocked by this encounter, and he realized he must learn more about the ways of the world. He went into the forest to meet with all of the animals. “What shall I do?” he asked them all.

“Pay attention to everything,” they answered. “There is much to learn in every sight and sound, in every nook and cranny, in every part of this wide world.”

One by one the animals guided him, teaching him the secrets of their worlds.

The boy was a watchful, patient student. He listened closely and watched what they did. He learned that he must build a box made of wood from the cottonwood tree, and this he did. Then, as the animals had taught him, he sealed himself inside the box, and the animals carried his box to the river and pushed it into the current.

For many days the sealed box floated, but the boy had been prepared. The animals had taught him how to survive this test, and when the box reached the place where two rivers joined, it washed up on the shore.

Soon a snake approached the box and freed the boy, and together they began to travel on land, moving westward still, following the path of the Sun.

“How long will it take us to reach the Sun?” the boy asked.

So they had, and the boy fell quiet.

And just at that moment, he noticed a light in the sky. It seemed to be coming closer, and so he watched, paying close attention to the light as it grew brighter and brighter. Now he saw that this was a comet, and it was rushing toward him.

“So it is,” said the snake, and at that moment the comet fell into the river, right before the boy and the snake.

“Where are you traveling?” the snake asked the comet.

“I am traveling to the Sun,” said the comet.

“Can you take us with you?” the boy asked politely.

“Yes, I will,” said the comet, and so the snake and the boy climbed onto the comet, and together they traveled farther west, toward the house of the Sun.

When at last they arrived, Mother Moon greeted them. “What is it?” she asked the boy.

“I have come to speak to the Sun,” said the boy. “I wonder if he might have time.”

Soon afterward the Sun arrived home. When he saw the boy, he recognized him as the boy who had once before visited him. But he saw new wisdom in the boy’s eyes.

“Good evening, Sun,” said the boy. “I have come to see you. Your mother was kind enough to welcome us into your home.”

“And what is it you want?” the Sun asked.

“I wish to know who my father is,” the boy said. “My mother told me that I ought to ask you.”

The Sun looked at the boy and said, “I am your father,” and the boy smiled. He felt that he was home.