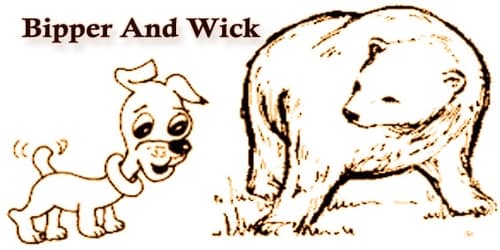 The snow had turned the forest into a winter wonderland; and as the bears worked hard to get their den prepared for the long winter ahead, the ice on the trees snapped aloud. The hard work made the bears very sleepy, and their yawns could be heard from far away. There was one bear amongst them, however, that had no intention of taking a long winters nap; his name was Bipper, and he didn’t understand the need to sleep for such a long time. It was Bipper’s first winter, and instead of hibernating he wanted to explore the forest for the first time by himself. Bipper was the youngest and smallest bear in his family, and his older siblings never let him forget it. He was constantly teased about his size and age.
As the bears prepared to enter their den, Bipper stretched his legs and rested next to a pine tree.
“Are you going to fall asleep before we’ve even entered the den, Bipper?” asked one of the older brother bears.
“Just taking a little break, that’s all,” said Bipper.
“You haven’t been doing much to help out,” said Bipper’s oldest sister. “What are you so tired from?”
“I’m not that tired, and if you ask me it’s a waste of time to sleep for so long. I would rather be out having fun in the forest,” said Bipper.
“Bipper, even though you’re a bear try not to be such a bear to be around,” said Bipper’s Momma. All of Bipper’s brothers and sisters laughed at Momma bear’s comment. “Bipper, in order to be rested for springtime we bear need to hibernate during the winter,” said the Momma bear.
“Yes, Momma,” replied Bipper.
Bipper kept to himself for the rest of the evening while the other bears prepared to settle down for their long winter nap. Bipper knew once the other bears fell asleep he could leave the den without being noticed. And that’s exactly what Bipper did. After all the other bears began to snore, Bipper quietly sneaked out of the den and into the forest. At first, Bipper was happy with his newfound freedom and loved being able to do whatever he wanted. He rolled around in the snow and repeatedly fell to the ground to make snow angels. But after some time passed, Bipper started to feel lonely and missed his family. The berries he was accustomed to eating off the trees were long gone, and he found himself growing very hungry. Bipper had also traveled a great distance, and even though he had a powerful sense of smell, he was finding it hard to find his way back to the den.