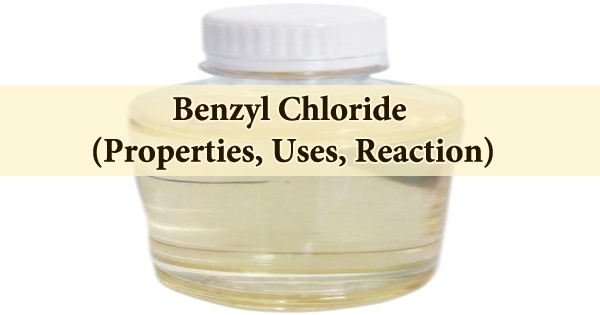 Benzyl chloride, also known as α-chlorotoluene, is a colorless to pale yellow liquid with a pungent, disagreeable odor. C6H5CH2Cl is the formula for this chemical molecule. The odor threshold is set at 0.05 parts per million. Toxic when inhaled or absorbed through the skin. Flashpoint 153°F; slightly soluble in water. A specific amount of sodium carbonate solution or propylene oxide is present in the stabilized form of benzyl chloride. This colorless liquid is a commonly used chemical building block that is a reactive organochlorine molecule.

The chloromethylation of benzene in the presence of a catalyst (ZnCl2) or the treatment of benzyl alcohol with SO2Cl2 can be used to make benzyl chloride. It’s made commercially by chlorinating boiling toluene in the presence of light. Approximately 100,000 tonnes are produced each year in this manner. The reaction is carried out via the free radical process, which involves the use of free chlorine atoms as intermediaries. The process produces benzal chloride and benzotrichloride as byproducts.

Benzyl chloride is a chemical intermediate that is employed in the production of dyes and pharmaceuticals, as well as a photographic developer. The initial step in making benzyl chloride was to treat benzyl alcohol with hydrochloric acid. It can be oxidized to benzoic acid or benzaldehyde, or substituted to form halogenated, sulfonated, or nitrated compounds. It produces mono-, di-, or tribenzyl amines when used with NH3. The benzylalkyl ether is generated when alcohols are added to the base. The phenolic or nuclear hydrogens in phenols can react to form benzylaryl ether or benzylated phenols.

Severe irritation to the upper respiratory tract, skin, eyes, and mucous membranes, as well as lung damage and pulmonary edema (fluid in lungs), are the acute (short-term) effects of benzyl chloride inhalation exposure in humans. The product of the reaction with NaCN is benzyl cyanide (phenylacetonitrile); the product of the reaction with aliphatic primary amines is N-alkylbenzylamine, and the reaction with aromatic primary amines is N-benzylaniline. Butyl benzyl phthalate plasticizer and other compounds are made from benzyl chloride. Benzyl chloride is utilized as a precursor to benzyl esters, which are employed as plasticizers, flavorants, and perfumes in industry.

High concentrations have a negative impact on the central nervous system (CNS). Long-term gavage (putting it experimentally in the stomachs of mice) exposure to benzyl chloride raised the frequency of benign and malignant tumors at several sites and resulted in a considerable increase in thyroid tumors in female rats, according to animal studies. With more halogen atoms substituted for hydrogen atoms, reactivity normally diminishes. Strong oxidizing and reducing agents are incompatible with materials in this group. Phenylacetic acid, a precursor of medicines, is made from benzyl cyanide, which is made from benzyl chloride treated with sodium cyanide.

Alkylation of tertiary amines with benzyl chloride produces quaternary ammonium ions, which are utilized as surfactants. Benzyl chloride is a flammable liquid that burns but does not ignite easily. When benzyl chloride is heated to breakdown, poisonous and corrosive gases are released. Phosgene is produced when some organic chlorides degrade. Keep away from strong oxidizing agents and incompatible with active metals such as copper, aluminum, magnesium, iron, zinc, and tin.

In the presence of copper, aluminum, iron, zinc, magnesium, and other catalysts, unsterilized benzyl chloride may violently degrade with the rupture of its container. In organic synthesis, benzyl chloride is used to introduce the benzyl protecting group into alcohol reactions, resulting in benzyl ethers, carboxylic acids, and benzyl ester. It’s utilized in the production of a variety of medications. The vulcanization of fluor rubbers and the benzylation of phenol and its derivatives for the creation of potential disinfectants are two suggested uses of benzyl chloride.

Grignard reagent can alternatively be made from benzyl chloride and metallic magnesium. When in contact with all common metals except nickel and lead, polymerizes with the release of heat and hydrogen chloride. It is preferred over benzyl bromide for the synthesis of this reagent because the bromide tends to create the Wurtz coupling product 1,2-diphenylethane when it reacts with magnesium. Decomposition to benzyl alcohol in hot water; reactions occur at the side chain containing chlorine and at the aromatic ring; interacts with steam and oxidizing chemicals.