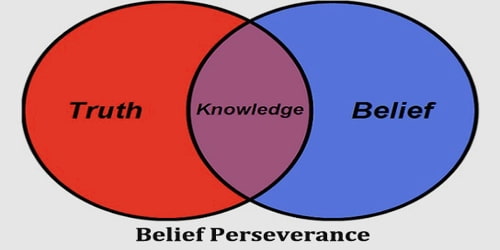 Belief perseverance is a concept that highlights the tendency for people to hold their beliefs as true, even when there is ample evidence to discredit the belief. It is also known as conceptual conservatism. When faced with evidence that contradicts their beliefs, people may choose to discredit, dismiss, misinterpret, or place little significance on the contradictory information. Such beliefs may even be strengthened when others attempt to present evidence debunking them, a phenomenon is known as the backfire effect (compare boomerang effect).

This concept has been studied through several experiments, and the results have always been rather interesting. Since rationality involves conceptual flexibility, belief perseverance is consistent with the view that human beings act at times in an irrational manner. Philosopher F.C.S. Schiller holds that belief perseverance “deserves to rank among the fundamental ‘laws’ of nature”.

Social psychologists Ross, Lepper, and Hubbard found that some people have a tendency or unwillingness to admit that their foundational premises are incorrect even when shown convincing evidence to the contrary. Belief perseverance is this tendency to reject convincing proof and become even more tenaciously held when the belief has been publicly announced to others.

For example, members of the Jonestown cult made a public admission of their loyalty to Jim Jones by selling all their possessions and following him to Guyana. Even though they later experienced irrational manipulation and abuse, they stayed to the point of committing mass suicide when he told them to do so.

Peter Marris suggests that the process of abandoning a conviction is similar to the working out of grief. “The impulse to defend the predictability of life is a fundamental and universal principle of human psychology.” Human beings possess “a deep-rooted and insistent need for continuity”.

There are three main types of belief perseverance, namely,

According to Lee Ross and Craig A. Anderson, “beliefs are remarkably resilient in the face of empirical challenges that seem logically devastating”. The following experiments can be interpreted or re-interpreted with the aid of the belief perseverance concept.

The first study of belief perseverance was carried out by Festinger, Riecken, and Schachter. These psychologists joined a cult whose members were convinced that the world would end on December 21, 1954. After the prediction failed, most believers still clung to their faith.

Physicist Max Planck wrote that “the new scientific truth does not triumph by convincing its opponents and making them see the light, but rather because its opponents eventually die, and a new generation grows up that is familiar with it”.