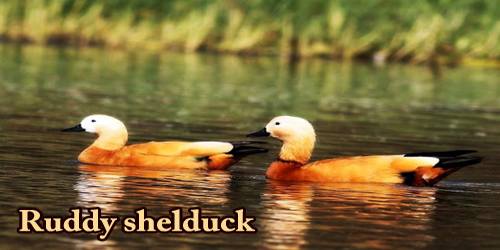 The ruddy shelduck (Tadorna ferruginea), also called sheldrake, any of the smaller members of the duck tribe Tadornini, family Anatidae (order Anseriformes). It is also known in India as the Brahminy duck. In Tibet and Mongolia, Ruddy Shelduck is considered sacred by the Buddhists. It is also a sacred animal in Slavic mythology. In Hindi and Urdu (India/Pakistan) it is called ‘Surkhab’. The genus name Tadorna comes from Celtic roots and means “pied waterfowl”, essentially the same as the English “shelduck”. It is a distinctive waterfowl, 58 to 70 cm (23 to 28 in) in length with a wingspan of 110 to 135 cm (43 to 53 in). It has orange-brown body plumage with a paler head, while the tail and the flight feathers in the wings are black, contrasting with the white wing-coverts. It is a migratory bird, wintering in the Indian subcontinent and breeding in southeastern Europe and Central Asia, though there are small resident populations in North Africa. It has a loud honking call. The ruddy shelduck (Casarca ferruginea), ranging from North Africa and Spain to Mongolia, is orangish, with a pale head and white wing patches. Drakes of most shelduck species have melodious whistling calls and are aggressive year-round. In the European species, the hen is solitary at the nest commonly in a rabbit burrow and lays smooth eggs. In North America, a merganser is sometimes called a sheldrake.

There are very small resident populations of this species in northwest Africa and Ethiopia, but the main breeding area of this species is from southeast Europe across central Asia to southeast China. These birds are mostly migratory, wintering in southern Asia. The bird was first described in 1764 by the German zoologist and botanist Peter Simon Pallas who named it Anas ferruginea, but later it was transferred to the genus Tadorna with the other shelducks. The male has orange-brown body plumage and a paler, orange-brown head, and neck, separated from the body by a narrow black collar. The rump, flight feathers, tail-coverts, and tail feathers are black and there are iridescent green speculum feathers on the inner surfaces of the wings. Both upper and lower wing-coverts are white, this feature being particularly noticeable in flight but hardly visible when the bird is at rest. The bill is black and the legs are dark grey. The female is similar but has a rather pale, whitish head and neck and lacks the black collar, and in both sexes, the coloring is variable and fades as the feathers age. The Ruddy Shelduck is usually found in pairs or small groups and rarely forms large flocks. However, molting and wintering gatherings on chosen lakes or slow rivers can be very large. This is a bird of the open country, and it will breed in burrows, tree holes or crevices distant from water, laying 6-16 creamy-white eggs, incubated for 30 days. In captivity, this species is generally aggressive and antisocial and is best housed in pairs unless in a very large area. Then it may mix with other species, although it will still be feisty at breeding time. It is one of the species to which the Agreement on the Conservation of African-Eurasian Migratory Waterbirds (AEWA) applies.