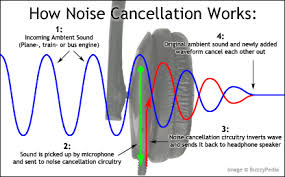 Any time I am asked what I do in a social setting I have to brace myself for a lot of blank looks. In the beginning, I would answer with a very forthright; “We produce active noise cancellation systems for heavy industry.” This was always followed by a lengthy silence until some brave soul would say, “So you make insulation?” or something to that effect. To the lay individual, when confronted with the words active noise cancellation, all they really hear is noise cancellation, and they fall back on their previous experience to help them categorize what I do, which generally means insulation.

Simply put, passive noise cancellation treatments are all about deflection and absorption. They are in essence a barrier between the observer and the noise source. Passive treatments take the form of foam plugs in the ear, foam lining between the engine of a car and the interior, and even the 20-foot concrete barrier walls that line busy streets. Their sole purpose is to either absorb the sound, and turn it into something else (commonly heat), or reflect it in another direction.

Active noise cancellation on the other hand relies on the principle of destructive interference; the idea of using one wave to cancel out another wave. The easiest way to visualize this principle is to use waves in water. If I drop a pebble in a pond, it creates ripples (waves). By dropping a second pebble in the pond shortly after the first, as the ripples from each rock intermingle, small areas are created where there are no waves visible. In fact, at those points, the surface is perfectly smooth. This phenomenon is a product of destructive interference.

Another way of visualizing it is by imagining a wave.  Every wave has two core properties: how fast it goes up and down (frequency) and how far it goes up and down (amplitude). Also, remember that a complete wave has peaks and valleys. Now, imagine adding a second wave to the first. This second wave is identical in frequency and amplitude, but the second wave is out of synch with the first. So much so, that the peaks and valleys of the second wave line up exactly with the valleys and peaks respectively of the original sound wave.  When identical sound waves are combined, they add their energy. Let’s say the first wave at its peak has an energy of 1, and the second wave at its valley has an energy of -1. Adding the two together causes the combined energy to equal zero!

Why use Active Instead of Passive

If that explanation sounded very complicated, don’t worry, it is. Implementing active noise cancellation is even more complicated than describing it. So why bother with it all? Because there are certain waves that passive treatments are not able to stop. A co-worker of mine is fond of saying “With enough concrete and re-bar, anything can be made quiet.” Unfortunately, there are lots of applications where concrete and re-bar are not an option.

Take your home for example. Usually, with the doors and windows shut, you don’t hear birds chirping or the typical car drive-by. But even with everything closed tight, you can still hear that car with the bass thumping as it drives by. The reason for this is that low-frequency noises are able to penetrate physical barriers more effectively than high-frequency noises. It’s the same principle that allows you to get an AM station while driving in the hills when you can’t get an FM station at all. AM waves are much lower in frequency and not affected as much by physical barriers.

That being said, passive treatments have a practical lower threshold at which point they offer limited or no reduction. The lower limit is debatable, but for the most part, passive treatments start suffering reduced effectiveness at about 1000 Hz, and their performance degrades as the frequencies get lower.  Active noise cancellation works best on noise below 300 Hz. It is possible to use ANC on noise up to 500 Hz but the reductions are limited and have to be considered on a case by case basis. (For more information on why ANC is only useful up to 500 Hz, please read part 2 of this series.)  As you can imagine, with such distinct areas of effectiveness, the two methods for reducing noise are actually complementary to one another. Active noise cancellation should not be considered as a replacement for passive treatment. In fact, we often recommend to our customers that they first do everything they can with passive noise cancellation, and if the noise levels are still too much of an issue, then consider active noise cancellation.

While active noise cancellation is a high-tech solution to unwanted noise. It’s not a substitute for a good piece of high-density foam. Because of the costs associated with each system, we recommend doing everything possible with passive forms of treatment and then re-evaluate your environment before deciding to implement active noise cancellation.