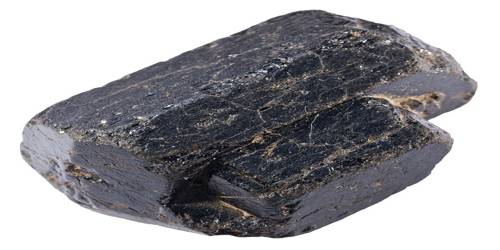 Augite is a common rock-forming pyroxene mineral with formula (Ca, Na) (Mg, Fe, Al, Ti) (Si, Al)2O6. It is a rock-forming mineral that commonly occurs in mafic and intermediate igneous rocks such as basalt, gabbro, andesite, and diorite. It is a single chain inosilicate mineral and member of pyroxene group. It was named after the Greek word for luster, based on the appearance of its cleavage surface.

Augite is a solid solution in the pyroxene group. Diopside and hedenbergite are important endmembers in augite, but augite can also contain significant aluminum, titanium, and sodium and other elements. The crystals are monoclinic and prismatic. Augite has two prominent cleavages, meeting at angles near 90 degrees. Augite occurs in the range of colors from black to dark brown, light brown, green and brown-green. It has translucent to an opaque appearance with prominent cleavages, vitreous luster, and greenish gray streak. It is non-fluorescent and forms massive fibers, granules or columns. Its fractures are brittle producing small, conchoidal fragments. The hardness of augite ranges from 5 to 6.5, and its average density is 3.4 g/cm3.

Augite is an essential mineral in mafic igneous rocks; for example, gabbro and basalt and common in ultramafic rocks. It also occurs in relatively high-temperature metamorphic rocks such as mafic granulite and metamorphosed iron formations. It commonly occurs in association with orthoclase, sanidine, labradorite, olivine, leucite, amphiboles and other pyroxenes.