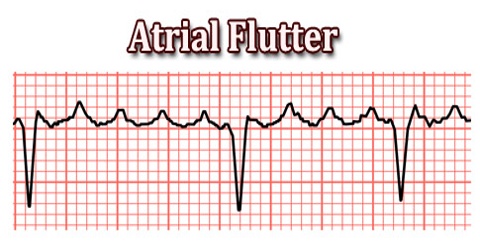 Atrial flutter is similar to atrial fibrillation, a common heart rhythm disorder. It is usually associated with a fast heart rate (100 or more heartbeats per minute), and is classified as a type of supra-ventricular tachycardia. It is a health condition (arrhythmia) where the atria of the heart as an electrical problem (a re-entry loop) that causes the atria to beat at a rapid rate of about 242 – 360 beats per minute (bpm). Atrial flutter was first identified as an independent medical condition in 1920 by the British physician Sir Thomas Lewis (1881–1945) and colleagues. The main danger of atrial flutter is that the heart does not pump blood very well when it is beating too fast.

There are two types of atrial flutter, the common type I and rarer type II. Most individuals with atrial flutter will manifest only one of these. Atrial flutter may be caused by abnormalities or diseases of the heart, by a disease elsewhere in the body that affects the heart, or by consumption of substances that change the way electrical impulses are transmitted through the heart. Atrial flutter can sometimes go unnoticed; its onset is often marked by characteristic sensations of regular palpitations. Such sensations usually last until the episode resolves, or until the heart rate is controlled. The electrical signal that causes atrial flutter circulates in an organized, predictable pattern. This means that people with it usually continue to have a steady heartbeat, even though it is faster than normal. Although a few people have no symptoms, common clinical symptoms of this arrhythmia are as follows:

Less common but more serious symptoms of this flutter arrhythmia include chest pain, more severe shortness of breath, and fainting.

The goals of treatment for atrial flutter are to control the heart rate, restore normal sinus rhythm, prevent future episodes, and prevent stroke. Most people known to have atrial flutter will be taking prescribed drugs. Avoid taking any stimulants, and consult with their health care provider before taking any new medications, herbs, or supplements.