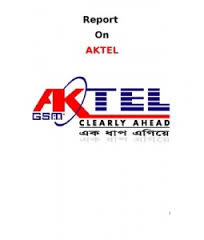 Mobile phone is a very common source of communication in these days. Most of the people are using mobile phone in the city and the urban areas robustly. At present, four different companies are providing mobile phone connections in Bangladesh. In compare to the big population it is becoming a huge market for mobile phone service companies. Every company is trying to provide as much facilities as possible to do marketing campaign in many ways they have available in their hand. TM International (Bangladesh) Limited is formed a huge demand in this sector. The company known as AKTEL across the country has more than one million subscribers both in prepaid and postpaid forms. Between them prepaid packages sold out as three times as in the other forms of subscription.

Origin of the Report:

Each professional degree needs practical knowledge of the respective field of discipline to be fruitful. Our BBA program also has an internship program, relating to the exchange of theoretical knowledge into the real life practical situation. The report entitled “Customer preference for using AKTEL Pre Paid Connection” originated from the partial fulfillment of the internship program. The main purpose of the preparation of the report is due to the partial fulfillment of the internship program period of the BBA Program conducted by the school of Business, AsianUniversity of Bangladesh.

During the internship program, I was under the supervision and guidance of Lt.Col. Khairul Alam, Director, Student Affairs, School of Business, AUB.

Moreover, during the attachment to AKTEL, I was under the supervision and guidance of Mr. Anis Farooq, Deputy Manager, Sales & Marketing Division.

The main objective of this study is to prepare an internship report (which is a partial requirement of the under graduation program) on the specified topic working within an organization implementing the knowledge that have been gathered over the past few years at the Asian University of Bangladesh (AUB).

The specific objectives of this report are as follows:

This report is a descriptive one, which was administered by collecting primary and secondary data. Descriptive Research has an important objective: gives description of something marketing characteristics of function (Malhotra, 2001) and also the description of phenomenon or characteristic associated with an object population (who, what, when, where and how of a topic, Copper, 2001).

The report tried to evaluate the customer preference on prepaid connection, why the customers use, like this connection. Before going in to the deep study, conceptual structure visualized under which the whole study was conducted.

In preparing a report about the customers preference is a difficult and complicated task and no single method is appropriate for preparing the report. For this reason, a number of procedures have followed to prepare a meaningful report. The methodology of the task can be depicted as follows:

This study covered two types of data, which are:

Primary data will be collected through a structured questionnaire, constructed specially for this report.

Going through different documents and papers developed by the company personnel and by others are the sources of secondary data.

Personal interview technique was the primary tool used in collecting information.   Interview with the Customer have done through questionnaire in order to discuss about the related matters before preparing the report. Managers and officers of AKTEL from different divisions were the main sources of secondary data.

Collected data are analyzed by using percentages, graphs to draw the conclusion. All the data have shown in tabular form.

The first step of the sampling design is to define the study population. Due to time restriction and other limitations, the survey will only focus into subscribers of Uttra, Banani, Gulshan and Baridhara. The sample area has been selected on the basis of organization’s interest.

As there is no concrete list or number of pre-paid subscriber in the areas which the researcher has mentioned, the sample frame will be random selection. The researcher will stand in front of any shopping center and pick any one who fulfills the criteria to be a sample.

To investigate the factors for customer’s preference, Non-probability Sampling Procedure has been used.  The sampling unit was selected through Convenience Sampling: where the selection of the sampling unit is left primarily on the interviewer (Malhotra, 2001). The reason behind choosing Convenience Sampling is many but here most importantly, there is no appropriate structure or framework that can aid to select the sample.  Farther, these procedures are both time saving and inexpensive.

Close ended question will be used to collect the data from the respondent. The respondent will respond under each attributes into a five point likert scale with “Strongly agree” resulting to a higher degree of satisfaction and with “Strongly disagree” resulting to a lower degree of satisfaction. Some demographic and spending pattern question will be in the questionnaire for more in-depth interpretation of the respondent.

The response of the respondent will be entered into the computer for tabulation and analysis. Microsoft Excel will be used to analyze the data.

The study is not free from some practical limitations. Following limitations have faced during the study and the time of working & data collection:

Time line for the Research:

Beginning of literature review, formulating research objective, conducting introductory chapter including detailed context of the study as well as development of research design.

Data collection, emphasizing on the methodological part as its initial stage and primary data analysis and preparing data presentation.

Preparing the report and prepare the ancillaries for presentation of the final report.

The researcher divides the questionnaire into two parts in the findings and analysis segment; these are general information and customer satisfactory of the users. These two parts will give a clear idea about the customer preference towards AKTEL prepaid connection. After finishing the survey the researcher found the following findings:

Profession of the respondents:

The above picture shows most of the users of AKTEL prepaid connection are service holder which is 43%. 40% of the total respondent’s are student, 7% are Businessmen, 6% are housewife and 4% are in other category. It indicates that most of the respondents are either student or service holder.

Monthly income of the respondents:

About the question of how much do you recharge each month using scratch card? The followings are found.

The above table show, most of the respondents’ recharge their mobile by Tk. 300 scratch card, which is 81 % and 12% are by Tk 600. It indicates that most number of AKTEL prepaid users use Tk 300 scratch card.

About the question of whether the customer waits for the expiry date to recharge.

The above picture shows most of the customers’ recharge their cell phone after finishing the current prepaid scratch card duration which is 81 % and rest of the customers do not wait for the full expiry period. Maximum numbers of prepaid users are waiting for the expiry date to recharge.

Reason for Waiting for full expiry date of Card Validity:

This question gives the answer why the customer waits for the scratch card validity date.

Can do without cell phone for certain duration

Looking to switch to other operator.

The above graph shows that budget constraint is the main reason for waiting for full expiry date of call validity. 75% respondents do not recharge card before expiry because of budget constraint.

Reason for Using a Mobile Phone:

The graphs show that most people use mobile phone to keep in touch with their families. 47% respondent said that it is their main usage of mobile phone. 23% use mobile connection for official use and 19% to contact with friends. Only 7% uses mobile phone for business reasons.

After taking survey the following picture are to be invented.

After analyzing this data, 44% of the total respondents agree with the statement, 24% strongly agree while other 20% respondents disagree with it as well.

Satisfaction with the Network coverage:

After taking survey the following picture are to be invented.

From the above graph it can be clearly understood that people like the “Prepaid Standard ” the company provides. 27% strongly agrees that they like this service and 37% agrees with it. 11% are neutral. 19% disagrees with it and 11% strongly disagrees with it. Among the respondents who disagree with said that the option of selected number should be increased.

Satisfaction with the Duration of Scratch Card:

Duration of prepaid scratch card is very important for the subscribers. The above picture shows that 51% of the total respondents strongly disagree with the validation time of the card and in contrast 29% respondents agree with it. So it can be a worrying factor for AKTEL.

Take prompt action in case of any dissatisfaction:

Advertisement plays a vital role in any business. When asked about this question 46% respondents agree that before buying this connection they were encourage to see the advertisement in billboard, newspapers, TV etc. 19% strongly agree with the statement.

Awareness of the Product:

About the awareness of the product of the customers are at AKTEL’s side. 44% of them Agree and 21% strongly agreed with it. No of disagreeing of people are small, only 7% strongly disagree.