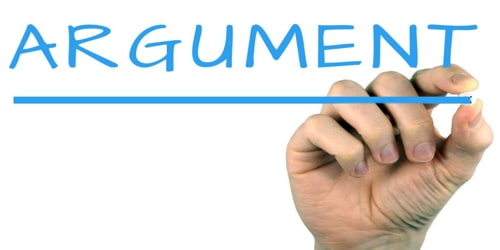 In logic and critical thinking, an argument is a list of statements, one of which is the conclusion and the others are the premises or assumptions of the argument. The logical form of an argument in a natural language can be represented in a symbolic formal language, and independently of natural language formally defined “arguments” can be made in math and computer science.

Perhaps the simplest explanation of what an argument is comes from Monty Python’s “Argument Clinic” sketch:

An argument is a connected series of statements intended to establish a definite proposition. …an argument is an intellectual process… a contradiction is just the automatic gainsaying of anything the other person says.

Argument comes from the 14th-century French word of the same spelling, meaning, “statements and reasoning in support of a proposition.” An argument can be a fact used as evidence to show that something is true, like a study that shows exercise improves certain health conditions — an argument for being more active. Argument also means “a discussion between people who have contrary views.”

Informal arguments as studied in informal logic, are presented in an ordinary language and are intended for everyday discourse. Conversely, formal arguments are studied in formal logic (historically called symbolic logic, more commonly referred to as mathematical logic today) and are expressed in a formal language.

An argument can be broken down into three major components: premises, inferences, and a conclusion.

There are two different types of claims which can occur in an argument. The first is a factual claim, and this purports to offer evidence. The first two premises above are factual claims and usually, not much time is spent on them — either they are true or they are not.

The second type is an inferential claim — it expresses the idea that some matter of fact is related to the sought-after conclusion.

In modern argumentation theories, arguments are regarded as defeasible passages from premises to a conclusion. Defeasibility means that when additional information (new evidence or contrary arguments) is provided, the premises may be no longer lead to the conclusion (non-monotonic reasoning). This type of reasoning is referred to as defeasible reasoning.