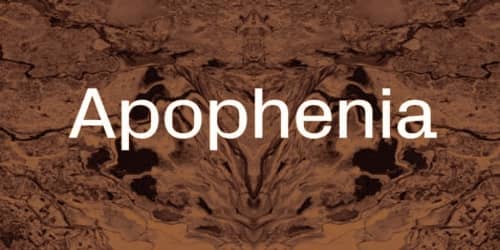 Definition – Apophenia is the experience of seeing patterns or connections in random or meaningless data. It can be classed as a false alarm, caused by an excess of sensitivity. Apophenia can be a normal phenomenon or an abnormal one, as in paranoid schizophrenia when the patient sees ominous patterns where there are none. The term (German: Apophänie) was coined by psychiatrist Klaus Conrad in his 1958 publication on the beginning stages of schizophrenia. He defined it as “unmotivated seeing of connections accompanied by a specific feeling of an abnormal meaningfulness”. He described the early stages of delusional thought as self-referential, over-interpretation of actual sensory perceptions, as opposed to hallucinations.

Apophenia can be considered as a blessing as well as the curse. It is because of this tendency that we can explore new things, but sometimes it may mislead us. It stems from the fact that we humans are always looking for meaning in our life. We often believe that everything happens for a reason. Well, most times, it could be that things are totally unrelated, and yet we won’t let go of our relentless pursuit to find a connection. That is apophenia.

Apophenia is often used as an explanation of paranormal and religious claims and adherence to horoscopes.

and underpins the origin of self-consciousness and the original misidentification with the ego.

Apophenia is commonly referred to as an error in perception. Although there is no confirmed reason as to why it occurs, there are some respected theories.

Example – Apophenia is a normal human experience. It’s not usually pathological but can become so in schizophrenia, when pattern recognition and interpretation run wild.  A famous example is that of the brilliant MIT physicist John Nash, featured in the film “A Beautiful Mind,” whose preoccupation with “meaningful” patterns became disabling. When the noises in the air conditioner are interpreted as voices telling you to do bad things, it’s time seek some help.

According to evolutionary psychologists, apophenia is not an error in cognition. It is rather what the human brain is designed for. The tendency to derive connections between seemingly unrelated events or the tendency to derive meaning from random objects or incidents may help warn an individual of impending danger. It is patternicity that helps a man make speculations about the near future, predict what may happen, and accordingly decide his course of action.