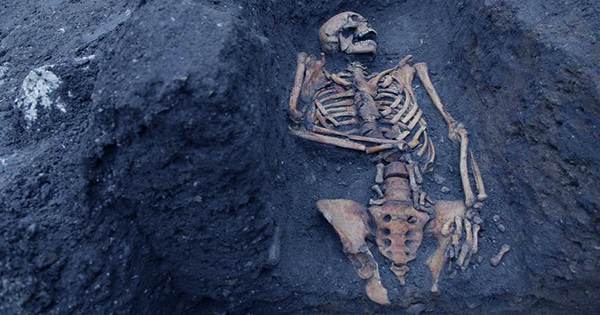 Archaeologists have unearthed an ancient Egyptian skeleton that probably buried with a golden tongue in the mouth so that the dead could enter the next world.

The Egyptian Ministry of Antiquities last week announced the discovery of the fancy skeleton, along with the remains and ruins of 15 more skeletons found at the Taposiris Magna Temple in western Alexandria, Egypt’s second-largest city.

According to the ministry’s note, amulets in the shape of golden tongues probably placed on the dead person’s face during a special burial to confirm their ability to speak in the afterlife before the court of the underworld god Osiris. However, this practice seems to be extremely rare and there are very few records of similar discoveries from Egypt.

The sleeve gold tongue of the ancient Egyptians was not the only strategy to ensure a smooth journey in later life. The team further said that gold ornaments have revealed in the excavations showing the god Osiris. And adorned with a skeletal horn and a crown adorned with a cobra snake on the forehead and at the same time adorned with a wide necklace with a pendant in the shape of a falcon, it symbolizes the very important god Horus, who represents the sky.

Director General of Alexandria Antiquities Dr Khaled Abu Al-Hamd said one of the most impressive discoveries was a woman’s funeral mask, which he commented was “engraved with” high precision “to depict the owner’s features.

After all, new excavations have uncovered some artifacts that could “change our perceptions” of Taposiris Magna.

Also known as the “Great Tomb of Osiris”, some say that this glorious place is the final resting place of Queen Cleopatra VII, although the location of the tombs of Cleopatra and Antony remains a long-standing mystery. Recent excavations have uncovered a number of coins bearing the name and image of Cleopatra VII, while statues near the site indicate that it built during the reign of King Ptolemy IV who ruled Egypt from 221 to 204.

Subsequently there was a great concern throughout the history of ancient Egypt. In 2019, researchers revealed that a written text discovered in a cemetery in the Necropolis of central Egypt by Dyer al-Barsha probably contained an early known copy of the Book of Two Ways, which was a kind of illustrated guideline to the world.