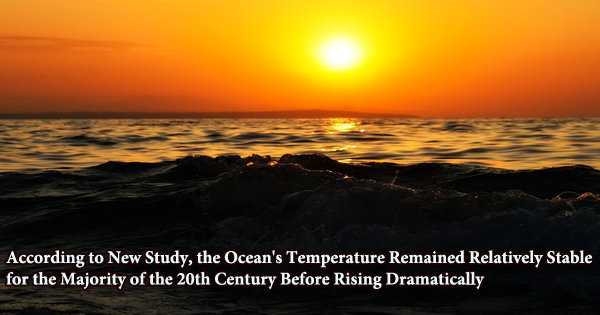 According to New Study, the Ocean’s Temperature Remained Relatively Stable for the Majority of the 20th Century Before Rising Dramatically

The pace of warming has typically been depicted as a steady climb from the mid-twentieth century to now in estimates of ocean heat content, which are essential for analyzing and projecting the impacts of climate change. However, recent data from UC Santa Barbara scientists Timothy DeVries and Aaron Bagnell suggests that the ocean temperature remained relatively constant for most of the 20th century before rising dramatically. The newly found dynamics might have a big impact on what we can expect in the future.

“There wasn’t an onset of an imbalance until about 1990, which is later than most estimates,” said DeVries, an associate professor in the Department of Geography, and a co-author on a paper that appears in the journal Nature Communications.

Temperature rises in the water have an impact on marine organisms and ecosystems. Coral bleaching and the loss of reproductive sites for marine fish and animals are both caused by rising temperatures. Rising ocean temperatures also have an impact on the advantages humans receive from the ocean, jeopardizing food security, increasing disease prevalence, and generating more extreme weather events, and the loss of coastal protection.

“Summing the three layers (with their slightly varied time periods), the full-depth ocean heat gain for the period from about 1993 to 2019 varies from 0.55 to 0.79 watts per square meter,”according to the State of the Climate 2019 report. Ocean warming causes deoxygenation, or a decrease in the quantity of oxygen dissolved in the ocean, as well as sea-level rise due to thermal expansion of seawater and melting of continental glaciers.

Rising temperatures, in combination with ocean acidification (the reduction in pH of the ocean as a result of CO2 absorption), have an impact on marine organisms and ecosystems, as well as the basic advantages people get from the ocean. Warming ocean waters are also linked to ice shelf and sea ice depletion, both of which have ramifications for the Earth’s climate system. Finally, rising ocean temperatures pose a hazard to marine ecosystems as well as human livelihoods.

“Prior studies didn’t consider the deep ocean,” said Bagnell, a graduate scholar in DeVries’ laboratory and the paper’s lead author. Because collecting temperature readings in the deep ocean (below 2,000 meters) is difficult, that region has mostly gone unaccounted for, and data is scarce. “There is some existing data, from research cruises and autonomous floats,” he added.

To connect the dots between data sets and “create a single consistent estimate of the top-to-bottom OHC shift for 1946 to 2019,” the researchers utilized an autoregressive artificial neural network (ARANN) and machine learning algorithms. As a result, the tendency is delaying warming by decades compared to prior forecasts.

There are two main possibilities for why the effects of global warming took so long to reach the ocean, De Vries said.

“One is that anthropogenic warming might have been weaker than previously thought during the 20th century, perhaps due to the cooling effects of aerosol pollution,” he said. The other is that the deep ocean may still be exhibiting the effects of climate events long past.

“It can take centuries for climate signals to propagate from the surface to the interior,” he said. Thus, while the consequences of a cold event like the Little Ice Age may be ancient history to us on the surface, their echoes may have continued to reverberate in the deepwater far into the twentieth century, acting as a buffer against the warming Earth.

The delayed cooling effect ceased in 1990, after which ocean temperatures began to rise, according to the research.

“The lag is catching up, and the ocean is warming more strongly now,” Bagnell said. The Atlantic and Southern Oceans are now seeing the highest warming, with the Pacific and Indian Ocean following closely after.

Warming of the oceans is a concern on many levels, as it can alter circulation, reduce its ability to absorb carbon, and fuel more intense storms, as well as raise sea levels and create hostile environments for undersea life. Because of the same lag that kept the seas cold until the previous 30 years, if the trend continues, the consequences may endure generations.