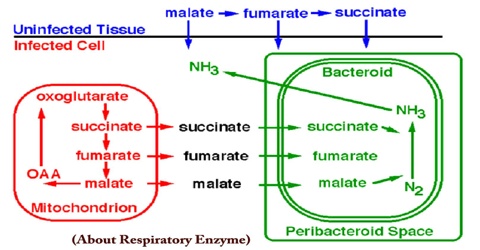 An enzyme, such as oxidase, that catalyzes the transfer of electrons from its substrate to molecular oxygen during cellular respiration. Enzymes are proteins that catalyze, or affect the rate, of chemical reactions without themselves being altered in the process. Specific enzymes catalyze each cellular reaction.

The first step of the respiration reaction takes place in the cytoplasm, or fluid, of the cell. Glycolysis consists of nine separate chemical reactions, each catalyzed by a specific enzyme.

The key players in glycolysis are the enzyme dehydrodgenase and a coenzyme (non-protein helper) called NAD+. Dehydrodgenase oxidizes glucose by stripping two electrons from it and transferring them to NAD+. In the process glucose is “split” into two molecules of pyruvate, which continue the reaction. The second step of the respiration reaction takes place inside a cell organelle called the mitochondria, which due to their role in ATP production are called “power factories” for the cell.

Just before the citric acid cycle starts, pyruvate is “groomed” for the reaction by being converted into a high-energy substance called acetyl coenzyme A, or acetyl-CoA.

Specific enzymes located in the mitochondria then power the many reactions that make up the citric acid cycle, also known as the Krebs cycle by rearranging chemical bonds and participating in more redox reactions.

The final step of the respiration reaction, also called the electron transport chain, is where the energy payoff occurs for the cell. During this step oxygen drives a chain of electron movement across the membrane of the mitochondria. This transfer of electrons powers the ability of the enzyme ATP synthase to produce 38 molecules of ATP.

In the microbial world, diversity is most apparent in the area of metabolic diversity. Bacteria have myriad ways to get energy for growth. The most efficient method for obtaining energy from available nutrients is through electron transport phosphorylation, aka respiration. Besides oxygen, bacteria can use an amazing variety of molecules as terminal electron acceptors and an even greater variety of molecules can serve as electron donors. Both electron donors and electron acceptors can range from organic compounds such as fumarate, to inorganic material such as metals. In addition to the expression of alternative terminal oxidases, the bacteroids must also express a number of other enzymes necessary for utilization of the nutrients available inside the nodule. For example, the dicarboxylic acids succinate and malate serve as energy rich substrates for the bacteroids. These compounds can be used to provide electrons to the respiratory chain of the bacterium. Therefore, these changes in the respiratory chain of the bacteroid are reflected in the amounts and types of cytochromes present.