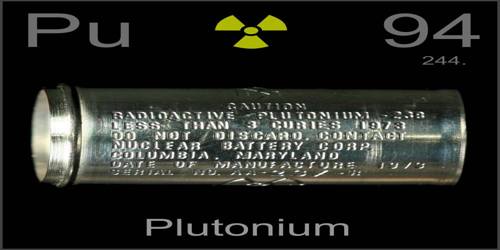 Plutonium is a silvery, radioactive metallic element of the actinide series that has the highest atomic number of all naturally occurring elements. It is found in minute amounts in uranium ores and is produced artificially by bombarding uranium with neutrons. It is absorbed by bone marrow and is highly poisonous. Its atomic number 94; melting point 640°C; boiling point 3,232°C; specific gravity 19.84; valence 3, 4, 5, 6. 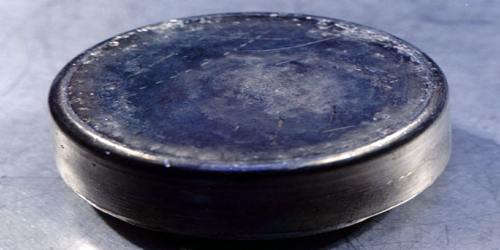 Plutonium was first produced and isolated in 1940 and was used to make the “Fat Man” atomic bomb that was dropped on Nagasaki at the end of World War II, just five years after it was first produced, said Amanda Simson, an assistant professor of chemical engineering at the University of New Haven. It is absorbed by bone marrow and is highly poisonous. Plutonium is used in nuclear weapons and as a fuel in nuclear reactors. Its longest-lived isotope is Pu 244 with a half-life of 76 million years.

Plutonium is much more common on Earth since 1945 as a product of neutron capture and beta decay, where some of the neutrons released by the fission process convert uranium-238 nuclei into plutonium-239. Atmospheric weapons testing in the 1950s and 1960s left tons of plutonium in the Earth’s atmosphere that is still there today, according to the World Nuclear Association.

Occurrences, Production and Properties of Plutonium 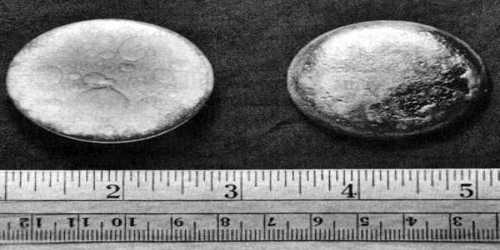 However, plutonium is a byproduct of the nuclear power industry. Each year, around 20 tons of plutonium is produced, according to the Los Alamos National Laboratory. Spent nuclear fuel can also be reprocessed to separate usable plutonium from other elements in the fuel.

Freshly prepared plutonium metal has a silvery bright color but takes on a dull gray, yellow, or olive green tarnish when oxidized in air. The metal quickly dissolves in concentrated mineral acids. A large piece of plutonium feels warm to the touch because of the energy given off by alpha decay; larger pieces can produce enough heat to boil water. At room temperature alpha-form plutonium is as hard and brittle as cast iron. It can be alloyed with other metals to form the room-temperature stabilized delta form, which is soft and ductile.

Plutonium normally has six allotropes and forms a seventh (zeta, ζ) at high temperature within a limited pressure range. These allotropes, which are different structural modifications or forms of an element, have very similar internal energies but significantly varying densities and crystal structures. This makes plutonium very sensitive to changes in temperature, pressure, or chemistry, and allows for dramatic volume changes following phase transitions from one allotropic form to another. The densities of the different allotropes vary from 16.00 g/cm3 to 19.86 g/cm3. 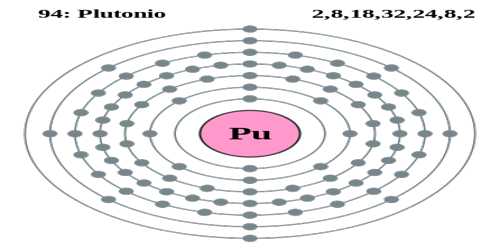 Plutonium, along with all of the other transuranium elements, is a radiological hazard and must be handled with specialized equipment and precautions. Animal studies have found that a few milligrams of plutonium per kilogram of tissue are lethal. Plutonium isotopes undergo radioactive decay, which produces decay heat. Different isotopes produce different amounts of heat per mass. The decay heat is usually listed as watt/kilogram, or milliwatt/gram. In larger pieces of plutonium (e.g. a weapon pit) and inadequate heat removal the resulting self-heating may be significant. All isotopes produce weak gamma radiation on decay.

One of the biggest uses for plutonium is energy. According to the World Nuclear Association, over one-third of the energy produced in most nuclear power plants comes from plutonium. Plutonium is the main fuel in fast neutron reactors. 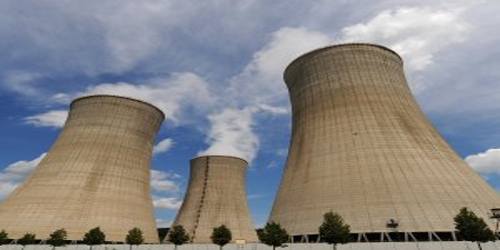 Plutonium-238 is used to make electricity for space probes using radioisotope thermoelectric generators. These generators are switched on when the probes can’t get enough solar power because they have traveled too far away from the sun. Some probes that use plutonium-238 are Cassini and Galileo.

Metallic plutonium is a fire hazard, especially if the material is finely divided. In a moist environment, plutonium forms hydrides on its surface, which are pyrophoric and may ignite in air at room temperature. Plutonium expands up to 70% in volume as it oxidizes and thus may break its container.