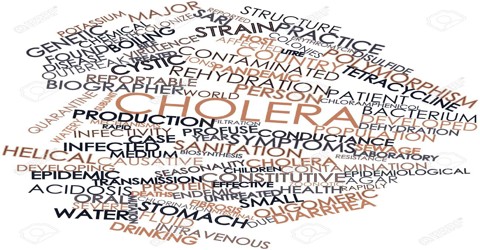 Cholera is an infectious disease that causes severe watery diarrhea, which can lead to dehydration and even death if untreated. Cholera remains a global threat to public health and an indicator of inequity and lack of social development. An estimated 3-5 million cases and over 100,000 deaths occur each year around the world. The infection is often mild or without symptoms, but can sometimes be severe. Approximately one in 10 (5-10%) infected persons will have severe disease characterized by profuse watery diarrhea, vomiting, and leg cramps. In these people, rapid loss of body fluids leads to dehydration and shock. Without treatment, death can occur within hours. Vibrio cholerae, the bacterium that causes cholera, is usually found in food or water contaminated by feces from a person with the infection. Common sources include:

The primary symptoms of cholera are profuse diarrhea and vomiting of clear fluid. These symptoms usually start suddenly, half a day to five days after ingestion of the bacteria. Often, symptoms are mild. But sometimes they are very serious. About one in 20 people infected have severe watery diarrhea accompanied by vomiting, which can quickly lead to dehydration. Although many infected people may have minimal or no symptoms, they can still contribute to spread of the infection. Signs and Symptoms of dehydration include:

If not treated, dehydration can lead to shock and death in a matter of hours.

Treatment and Prevention of Cholera

Cholera is an easily treatable disease. The majority of people can be treated successfully through prompt administration of oral rehydration solution (ORS). The WHO/UNICEF ORS standard sachet is dissolved in 1 litre (L) of clean water. Adult patients may require up to 6 L of ORS to treat moderate dehydration on the first day.

Severely dehydrated patients are at risk of shock and require the rapid administration of intravenous fluids. A 70 kg adult will require at least 7 L of intravenous fluid, plus ORS during their treatment. These patients are also given appropriate antibiotics to diminish the duration of diarrhoea, reduce the volume of rehydration fluids needed, and shorten the amount and duration of V. cholerae excretion in their stool. Antibiotics, which kill the bacteria, are not part of emergency treatment for mild cases. But they can reduce the duration of diarrhea by half and also reduce the excretion of the bacteria, thus helping to prevent the spread of the disease.

There are currently three cholera vaccines recommended by the World Health Organization (WHO). These are Dukoral, Shanchol, and Euvichol. All three require two doses to give full protection. Dukoral needs to be taken with clean water, and it provides roughly 65 percent protections for 2 years. Shanchol and Euvichol do not need to be taken with water, and they provide 65 percent protection for 5 years. All the vaccines offer higher protection nearer to the time they are given. (Handwashing is important to prevent the spread of cholera disease)

A multifaceted approach is key to prevent and control cholera, and to reduce deaths. A combination of surveillance, water, sanitation and hygiene, social mobilisation, treatment, and oral cholera vaccines are used. The long-term solution for cholera control, which benefits all diseases spread by the fecal-oral route lies in economic development and universal access to safe drinking water and adequate sanitation. These measures prevent both epidemic and endemic cholera.