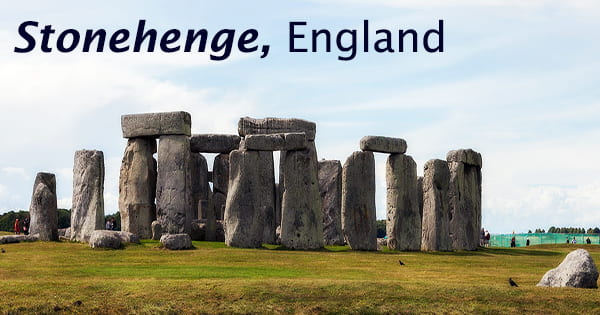 A visit to a historical place/building (Stonehenge, England)

Stonehenge is an ancient stone circle monument, cemetery, and archaeological site in Wiltshire, England, about 8 miles (13 km) north of Salisbury. It is made up of an outer ring of vertical sarsen standing stones that are about 13 feet (4.0 m) high, seven feet (2.1 m) wide, and weigh around 25 tons, with connecting horizontal lintel stones. The earliest buildings in the region are four or five holes, three of which appear to have supported huge pine ‘totem-pole type’ poles constructed between 8500 and 7000 BC during the Mesolithic period. It’s unclear how these posts link to Stonehenge’s subsequent monument. Though no definitive evidence exists as to what Stonehenge was erected for, it was most likely a sacred place and a display of the power and riches of the chieftains, nobles, and priests who commissioned it, many of whom were buried nearby in the numerous barrows. A ring of tiny bluestones surrounds it on the inside. Free-standing trilithons, two larger vertical Sarsens connected by one lintel, are found within. The entire ruined monument is aligned with the dawn on the summer solstice. This amazing ancient monument is one of the most popular and surely one of the most unusual locations to visit in the United Kingdom, attracting tens of thousands of tourists each year. The stones are embedded in earthworks in the heart of England’s most dense Neolithic and Bronze Age monument complex, which includes several hundred tumuli (burial mounds). Perhaps the location was dedicated to the realm of the ancestors, which was segregated from the world of the living, or it was a healing center. Although it is unclear if the Druids (Celtic priests) used it, modern-day Druids meet there every year to celebrate the midsummer dawn. The monument is estimated to have been built between 3000 and 1500 BC, but no record of its origin or purpose exists, leading to a plethora of theories and legends, some of which indicate religious or astronomical importance.

Stonehenge is a British cultural symbol and one of the most well-known sites in the United Kingdom. Since 1882, when legislation to safeguard historic monuments was first successfully adopted in Britain, it has been a legally protected Scheduled Ancient Monument. Its intentionally formed sarsen stones (blocks of Cenozoic silcrete) placed in post-and-lintel arrangement, as well as the remote provenance of its smaller bluestones (igneous and other rocks) from 100–150 miles (160–240 km) away in South Wales, make it unusual as a prehistoric stone circle. In 1986, UNESCO included the monument and its environs to its list of World Heritage Sites. The Bronze Age ring of standing stones has a magical allure, especially during the summer and winter solstices when the sun’s and moon’s light is aligned with the stones. Stonehenge has long been the subject of historical conjecture, and theories regarding the structure’s meaning and importance have evolved in the twenty-first century. Human bone deposits date back to 3000 BC, when the ditch and bank were initially built, and have been found for at least another 500 years. Many of the original sarsens and bluestones were broken up and carted away throughout Britain’s Roman and medieval centuries, so the Stonehenge that is visible today is incomplete. The chalk-down land in the Stonehenge area may have been an exceptionally open terrain at a time when most of the rest of southern England was heavily covered by forest. Disturbance of the natural chalk by periglacial impacts and animal burrowing, low quality early excavation records and a lack of reliable, scientifically confirmed dates make dating and comprehending the many stages of activity difficult. Between 3000 and 2935 BCE, the oldest portion of the Stonehenge monument was constructed. It encloses 56 pits in a circular enclosure that is more than 330 feet (100 meters) in diameter. Between Stonehenge’s first and second periods of building, there is little indication of activity except for human graves. The presence of postholes from the early third millennium BC shows that a timber building was constructed within the enclosure at this time. The stones appear to have been set down in a logical order in long foot units and subunits; the sarsen circle’s circumference is 300 long feet. The postholes are smaller and less evenly distributed than the Aubrey Holes, measuring about 16 inches (0.4 m) in diameter. Between 2470 and 2280 BCE, the side ditches and banks of a ceremonial avenue almost 2 miles (3 km) long were dug from Stonehenge to the River Avon, according to radiocarbon dating. Only 43 of the 80 standing stones (marked in blue on the plan) can still be traced today. The bluestones (some of which are formed of dolerite, an igneous rock) are thought to have been carried by the builders from the Preseli Hills, which are located 150 miles (240 kilometers) distant in modern-day Pembrokeshire, Wales. The avenue is 60 to 115 feet (18 to 35 meters) wide and ends with a tiny henge on the riverbank. Between 2280 and 2030 BCE, the fourth stage of Stonehenge’s construction took place. A ring of trenches known as the Z Holes was dug outside the sarsen circle somewhere between 2030 and 1750 BCE during Stonehenge’s fifth stage. Between 1640 and 1520 BCE, the second ring of pits known as the Y Holes was dug during the monument’s sixth and final stage of building. While excavating for a proposed highway tunnel at Stonehenge in February 2021, scientists discovered “huge troves of Neolithic and Bronze Age antiquities.” The discovery of the quarries allowed researchers to determine that the stones were mined around 500 years before Stonehenge was built (using radiocarbon dating of hazelnut shells and charcoal left by the quarries’ employees). The bluestones might have been part of an older structure that was removed and its stones repurposed to create Stonehenge, according to the experts.