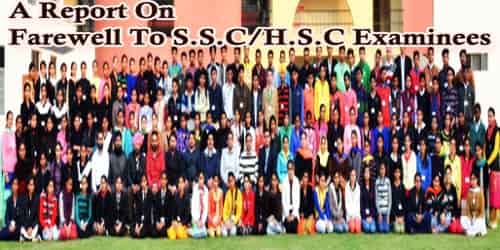 A Report On Farewell To S.S.C/H.S.C Examinees At (Institution Name)…….School/College

A farewell to the S.S.C/H.S.C examinees of 2019 was organized on 15th January at (Institution name)……school/college auditorium. Famous educationist principal Mr./Mrs. ……(Name) was the chief guest while the Principal presided over the program.

Then the Principal delivered his instructive speech. He/she told the students about some rules that a student should abide by in the examination hall. He/she also advised them to follow the instructions given on the back page of the Admit Card.

At the end of the function, Pesh Imam of District Central Mosque Moulana (Name)…….. led a milad mahfil and special munazat for the success of the examinees.