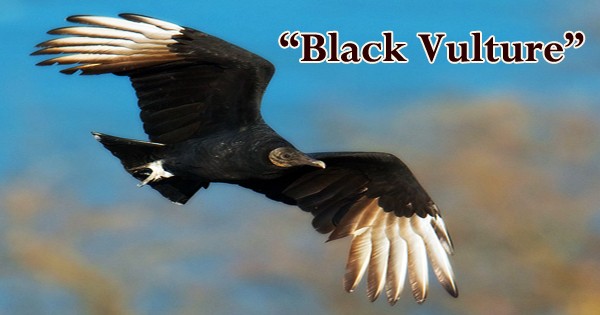 The Black Vulture (Coragyps atratus), often known as the American Black Vulture, is a New World vulture with a range that stretches from the northeastern United States through Peru, Central Chile, and Uruguay. Argentina, Belize, Bolivia, Brazil, Canada, Chile, Colombia, Costa Rica, Ecuador, El Salvador, French Guiana, Guatemala, Guyana, Honduras, Mexico, Nicaragua, Panama, Paraguay, Peru, Suriname, Uruguay, and Venezuela are among the countries where this species can be found. Although a ubiquitous and widespread species, the turkey vulture, which breeds well into Canada and south to Tierra del Fuego, has a considerably more restricted distribution. It is the only living member of the Coragyps genus, which belongs to the Cathartidae family. Black Vultures are nearly stylish, with sooty black plumage, a bare black skull, and tidy white stars under the wingtips. Black Vultures are compact birds with broad wings, short tails, and forceful wingbeats, whereas Turkey Vultures are lanky birds with unsteady flying. The two species are frequently seen together: the Black Vulture compensates for its loss of sense of smell by following Turkey Vultures to carcasses. Black Vultures are highly gregarious birds with a strong sense of family loyalty, sharing food with relatives and feeding young for months after they have fledged. This species is unrelated to the Eurasian black vulture, an Old-World vulture in the Accipitridae family, despite the similar name and appearance (which includes eagles, hawks, kites, and harriers). It prefers to live in open areas with scattered woods or shrublands. The black vulture has a wingspan of 1.5 meters (4.9 feet), making it a huge bird for a vulture. It features black plumage, a grayish-black head and neck with no feathers, and a short, hooked beak. Low-elevation black vultures are the most common. Although they breed in deep woodlands, they prefer to feed in open areas. Sycamores, pines, hickories, oaks, junipers, and bald cypress roost in undisturbed stands of tall trees. The black vulture is a scavenger that eats carrion, but it will also devour eggs or kill young animals (livestock such as cattle). It also feeds at waste dumps in human-populated places. It hunts for food either with its sharp vision or by following other (New World) vultures with a good sense of smell. Although Turkey Vultures have a keen sense of smell, Black Vultures aren’t quite that skilled. They soar high in the sky in search of food, keeping a watch on the lower-flying Turkey Vultures. The Black Vulture follows closely behind a Turkey Vulture as its nose senses the wonderful odor of decaying flesh and settles on a cadaver.

The black vulture is a huge bird of prey that measures 56–74 cm (22–29 in) in length and has a wingspan of 1.33–1.67 m (52–66 in). Black vultures from North America and the Andes weigh between 1.6 and 3 kg (3.5–6.6 lb), although smaller vultures from the tropical lowlands weigh between 1.18 and 1.94 kg (2.6–4.3 lb). In Texas, 50 vultures weighed an average of 2.15 kg (4.7 lb), while 119 birds in Venezuela weighed an average of 1.64 kg (3.6 lb). The extended wing bone is 38.6–45 cm (15.2–17.7 in) long, the shortish tail is 16–21 cm (6.3–8.3 in) long, and the tarsus is 7–8.5 cm (2.8–3.3 in) long. It has a black body, a short, square tail, and a wrinkled dark gray head and neck with no feathers. It has flimsy feet and a slender bill. The undersides of its broad circular wings are bordered in white. Males and females have the same appearance. From southern New York and southern Ohio south to Texas and Central and South America, the black vulture can be found. In the fall, birds in the northern half of its range may migrate. It has been spotted as far north as Maine on rare occasions. Due to the lack of a voice box, Black Vultures’ vocal talents are confined to scratchy hisses and grunts. Although Black Vultures and their cousins are only found in North and South America, the earliest fossils from this group were discovered in Europe, dating back at least 34 million years. Other vulture species will avoid black vultures because they feed in big numbers and are hostile. When alarmed, a black vulture may regurgitate partially digested food to frighten off predators and lighten its load for flight. It enjoys open ground with wooded or brushy patches intermingled. It can also be found in moist lowland forests, shrublands and grasslands, marshes and swamps, pastures, and badly degraded former forests, among other places. It prefers the lowlands and is rarely spotted in the mountains. It is usually seen soaring or perched on fence posts or dead trees. Scavenger, the black vulture. It feeds on the carcasses of dead animals or carrion. It consumes frail, sick, or young birds and mammals on occasion. Unlike the turkey vulture, the black vulture hunts for food by sight rather than scent. It hunts in groups for food. It soars in the air until one of the members of the flock spots food. After that, the party descends to the earth and begins digging into their discovery. The black vulture’s featherless head reduces the accumulation of dead and rotting flesh in its feathers. It is usually silent, but when agitated or feeding, it can create hisses and groans. The black vulture is a social bird that gathers in huge flocks to roost. Under a shrub, on a hollow log, under large boulders, or in a cave, the female black vulture lays two eggs. Both the male and the female incubate the eggs for 32-41 days. The oval egg measures 7.56 cm × 5.09 cm (2.98 in × 2.00 in) on average. Around the bigger end, the smooth gray-green, bluish, or white shell is blotched or dotted with lavender or pale brown. The chicks fledge when they are 63-70 days old. The black vulture is fiercely possessive of the carrion it discovers, and will violently chase away the larger turkey vulture. It is generally a silent bird, but to keep other scavengers away from its food, it hisses moans and even barks. The oldest Black Vulture on record was at least 25 years and 6 months old, and captive Black Vultures may live far longer.