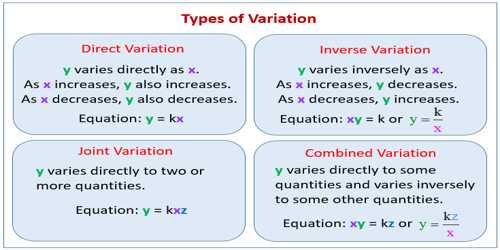 “Variation” defines a concept that deals with variability in mathematics. Variation is defined by any change in some quantity due to change in another. We often come across with different types of variation problems in mathematics. Variation problems involve fairly simple relationships or formulas, involving one variable being equal to one term. Here follows the most common kinds of variation.

Another form of variation is the inverse variation which works when there is a relationship between two variables in which the product is a constant. When one variable increases the other decreases in proportion so that the product is unchanged.

We will discuss about such variations, which are classified into three types: 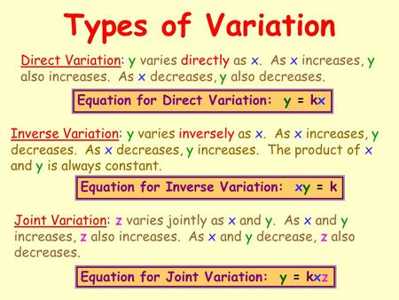 If two variables A and B are so related that when A increases ( or decreases ) in a given ratio, B also increases ( or, decreases ) in the same ratio, then A is said to vary directly as B ( or, A is said to vary as B ). This is symbolically written as, A ∝ B (read as, ‘A varies as B’ ). Suppose a train moving at a uniform speed travels d km. in t minutes. Now, consider the following table:

Conversely, if AB = k where A and B are variables and k is a constant, then A ∝ 1/B Hence, if the product of the corresponding values of two variables is constant, then one quantity varies inversely as another.

Again, if A varies inversely as & then AB = constant ; but AB = constant implies that when A increases in a given ratio, B decreases in the same ratio and vice — versa. Thus, if two variables are so related that an increase (or decrease ) in the value of one variable in a certain ratio corresponds to a decrease (or increase) in the same ratio in the value of the other variable then one variable varies inversely as another.

If x men take y days to plough z acres of land, then x varies directly as z and inversely as y.

How to Find the Third Angle of a Triangle?

Volume of a Sphere