Home Other Ulamina and the Stolen Canoe 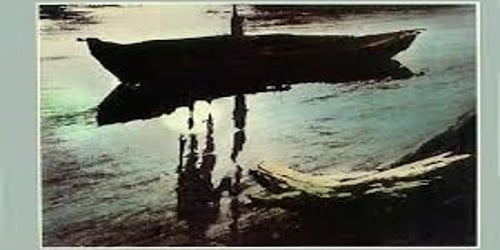 Ulamina and the Stolen Canoe (A Tale From Australia)

Once upon a time, the people of the northern coast of Australia were known as the Bandicoot people. Often they stood upon their shores staring longingly out to sea at a nearby island. They had heard tales of the island’s beauty and of its plentiful fruit. They also had heard that thousands of kangaroo ran wild there.

The people dreamed and talked about the island, but they could never travel there, for they had no way of crossing the water. Only one canoe existed in the whole country.

A man named Ulamina owned the canoe, but Ulamina let no one use his precious boat. Ulamina was a solitary man who feared others might harm his treasure. His solitude led him to feel mistrust toward everyone. Ulamina did not understand other people. He knew only that his canoe was a gift, and he feared always that he might one day lose it.

The Bandicoot people despised Ulamina for his selfishness. They stood on the shore and complained among themselves about the man a few of them knew. “How I wish I could see the island,” one man said. “They say the fruit is as big as the sun, and rabbits and kangaroo crowd the fields there.”

“Ulamina is a cruel man,” another said.

“Selfish, that’s what he is,” others agreed.

On and on they grumbled.

One young man named Banguruk was determined to see the island. The more he stared at it, the more he knew he must find a way there. Banguruk refused to join the others in their complaining about Ulamina, for he did not know him. “There’s no sense in complaining,” Banguruk told the others and walked away to be alone. He sat down to think about how he might become Ulamina’s friend.

After a while, Banguruk knew exactly what to do. “Everyone deserves kindness,” Banguruk thought, “and kindness is rewarded with kindness.” With this in mind, Banguruk went to see Ulamina.

From that day on, whenever Ulamina needed any sort of assistance, Banguruk was at his side to help. If Ulamina’s nets were torn, Banguruk mended them. When Ulamina was tired, Banguruk did his chores for him. Banguruk was generous. One day he speared a kangaroo and took the animal to Ulamina, offering him the largest portion of the meat. When the evenings were cool, Banguruk collected extra wood for Ulamina’s fire.

After many months, Ulamina began to feel affection for Banguruk. A flicker of gratitude grew to a flame of trust and friendship.

One day Ulamina awoke thinking of the beautiful island. He began to dream of practicing his favorite sports with a friend at his side.

“I have just one friend,” Ulamina said to himself. When Banguruk appeared that morning, Ulamina said, “I am going out in my canoe to the island to hunt turtles. Would you like to join me?”

Banguruk was overjoyed. The two men climbed into the canoe and paddled out to sea. Before long Banguruk caught a large turtle, and with Ulamina’s help, he paddled quickly back to shore. Banguruk pulled the canoe up on the shore, placed the large turtle upon his strong shoulders and climbed to the ridge of the sandhill to build a fire. Out of sight of the sea and the canoe, Banguruk began to build a fire, and Ulamina smiled as he watched him. Both men looked forward to sharing their catch, and Ulamina thought about how lucky he was to have found a friend.

Soon Banguruk’s fire was blazing, and when the other Bandicoot men saw the smoke rising, they sneaked along the beach toward the canoe.

Looking right and left, they saw no one was watching. They launched the canoe and paddled quickly out to sea, heading toward the island.

Ulamina had fallen asleep and was dreaming, soothed by the delicious smell of turtle meat. But suddenly the voices echoing across the calm sea woke him. He stood up and peered over the sandhill, and, to his dismay, he saw the Bandicoot men paddling his canoe far away.

He quickly rose and rushed to the beach. “Return my canoe,” he cried, wading into the water. “Come back! You’ve stolen my canoe!” He waded in, deeper and deeper.

When he realized the men would not return, he was distraught. He knew he had been outwitted, and blamed the man he thought had been his friend.

“I do not belong among men,” he said, tears falling from his eyes. He turned himself into a starfish and floated to the bottom of the sea.

Ulamina, Starfish Man, has lived at the bottom of the sea ever since. He waves his arms about and drifts through the water, hoping to recapture his stolen canoe. And as for Banguruk, he, too, searches the sea, but he is searching for his sad friend, Starfish Man.