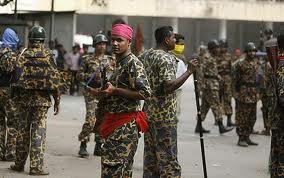 Military tribunal hearings against members of the Bangladesh Rifles (BDR) accused of participating in a February 2009 mutiny continued through 2011. Military courts convicted nearly 1,000 soldiers in mass trials that did not meet fair trial standards, among other things because the prosecution failed to produce individualized evidence against each detainee. In a single trial that concluded on June 27, 657 of 666 defendants were found guilty and sentenced to prison terms ranging from four months to seven years.

Several thousand other soldiers remain in custody awaiting trial in military courts, while another 847 have been charged under the Bangladesh Criminal Code. Some of those charged under the criminal code face the death penalty and many do not have lawyers.

The government did not investigate allegations of torture and possibly as many as 70 custodial deaths during investigations after the mutiny. Many suspects were denied access to legal counsel, particularly in the few months directly after the mutiny.

After Nobel Peace Laureate Mohmmad Yunus, founder of the Grameen Bank, was removed from his position at the bank because he had exceeded the mandatory retirement age, there were mysterious attacks on his supporters. In May Sagirur Rashid Chowdhury, an accounts officer at the bank, was picked up outside the office by plainclothes men. When he was released his body bore signs of severe beatings. He said his abductors had asked him to issue a public statement withdrawing support for Yunus. In September six women directors and one former director of the board of directors of the Grameen Bank, all beneficiaries of the microcredit system, suffered intimidation by police who came and searched their rooms.

The government continued legal action aimed at intimidating the Bangladesh Center for Worker Solidarity (BCWS), a trade union group. After revoking BCWS’s registration one agency demanded that two union leaders, Kalpona Akhter and Babul Akhter, both facing criminal charges, resign as a precondition to renewed registration of the organization. BCWS has denied all allegations against it.

To address fair trial concerns, the government in June 2011 amended the International Crimes (Tribunals) Act of 1973 to include some basic due process concerns, such as the right to the presumption of innocence and a fair and public hearing. But the law, established to prosecute those responsible for atrocities in the war of 1971, still fell short of international standards. The definitions of war crimes, crimes against humanity, and genocide did not conform to international standards and the government failed to amend the law to ensure due process. Defense lawyers, witnesses, and investigators said they had been threatened.

The tribunal in 2011 began proceedings in its first case, that of Jamaat-e-Islami leader Delawar Hossein Sayedee, accused of involvement in war crimes in the 1971 war.

Bangladeshi authorities did little to prevent intensifying violence and discrimination against indigenous groups residing in the Chittagong Hill Tracts. There were repeated clashes between ethnic and religious minority groups and “settlers” who belong to the majority Bengali community. These clashes were in part a result of government failure to implement its agreement with the indigenous communities to protect their rights.

Those in the Bangladesh Rifles (since renamed Bangladesh Border Guards) responsible for the killings, violence and other crimes that took place on February 25 and 26, 2009 should obviously be held accountable; however, the process of accountability in a civilised country like Bangladesh should not include custodial killings, torture and unfair criminal trials.

One would like to believe that the government has a credible response to these questions but experience suggests that this is unlikely to be provided.

But perhaps the cruellest thing of all for those of us living in Bangladesh is that unless the government starts to acknowledge its responsibility for the human rights violations by its law enforcement agencies, nothing at all will change for the better.