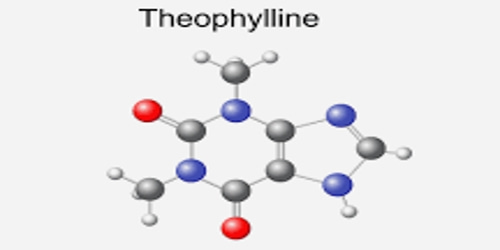 Definition: Theophylline, also known as 1,3-dimethylxanthine, is used together with other medicines to treat the symptoms of asthma, bronchitis, emphysema, and other lung diseases. It belongs to a group of medicines known as bronchodilators.

As a member of the xanthine family, it bears structural and pharmacological similarity to theobromine and caffeine, and is readily found in nature, and is present in tea (Camellia sinensis) and cocoa (Theobroma cacao). A small amount of theophylline is one of the products of caffeine metabolic processing in the liver.

This drug comes in the form of an oral tablet, oral capsule, or an oral solution. People take these drugs by mouth. This medicine is available only with the doctor’s prescription.

Do not take theophylline in larger or smaller amounts or for longer than recommended. Theophylline overdose can occur if people accidentally take too much at one time, or if their daily doses are too high. To be sure they are using the correct dose; their blood will need to be tested often.

Theophylline is naturally found in cocoa beans. Amounts as high as 3.7 mg/g have been reported in Criollo cocoa beans. 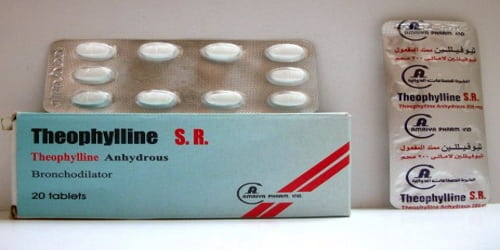 Uses of Theophylline: Theophylline is used to treat the symptoms of asthma or other lung conditions that block your airways, such as emphysema or chronic bronchitis. It may be used as part of a combination therapy. This means people may need to take it with other medications.

The main actions of theophylline involve:

The main therapeutic uses of theophylline are aimed at:

Blocks the action of adenosine; an inhibitory neurotransmitter that induces sleep contracts the smooth muscles and relaxes the cardiac muscle.

Take the extended-release capsule or tablet every morning at the same time each day. People may take their second dose 10 to 12 hours after the morning dose and before the evening meal unless their doctor tells them otherwise.

Theophylline works by opening the airways in our lungs. It does this by relaxing the muscles and decreasing the response to substances that cause our airways to constrict. This makes it easier for us to breathe. 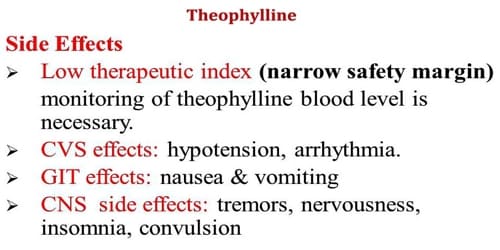 Side Effects of Theophylline: The use of theophylline is complicated by its interaction with various drugs and by the fact that it has a narrow therapeutic window. Its use must be monitored by direct measurement of serum theophylline levels to avoid toxicity. Some of the more common side effects that can occur with use of theophylline include:

Serious side effects and their symptoms can include the following:

Theophylline toxicity can be treated with beta blockers. It should not be used in combination with SSRI Fluvoxamine.