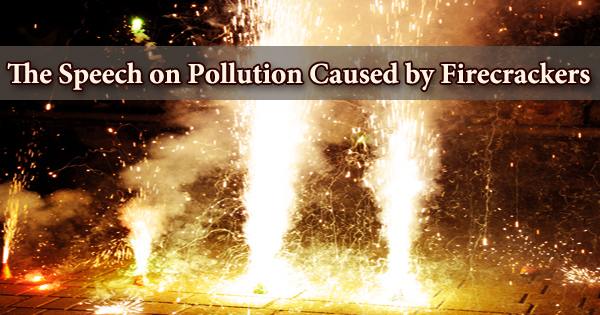 The Speech on Pollution Caused by Firecrackers

A very Good Morning/Afternoon/Evening (Ladies and Gentlemen) to Honorable Sir/Madam, respected teachers, parents, seniors, and my dear friends/students, Warm Greetings to Everyone!

Thank you all for taking out time and being present at this seminar session. Today, I ……(name) would like to speech on the topic of “Pollution Caused by Firecrackers.”

People all around the world have determined that the best way to commemorate major festivals and occasions is to hold a public fireworks display. We prefer to commemorate the beginning of a New Year, our nation’s independence, and other events by blowing things up. Most of us are aware that fireworks may be hazardous; we either know or know of someone who has ended up in the hospital emergency room as a result of pyrotechnics; nevertheless, most people are entirely ignorant of the more subtle environmental and health effects that fireworks can have.

The sound of the crackers will shock anybody who has heart problems, causing high blood pressure. Crackers pollution also contributes to global warming, and morning cracker dust enters water pipes, causing problems. As we all know, climatic conditions are rapidly deteriorating in many countries, and people are finding it increasingly difficult to breathe. Pollution levels have been beyond all standards, and it is past time for us to take aggressive actions to address this issue, otherwise living in the city may become dangerous for everyone.

I just want to point out that crackers are highly damaging to our environment due to the fact that they contain sulfur and carbon and emit a number of pollutants. Chemicals that function as reducers, colorants, stabilizers, oxidizers, and binders. Antimony sulphides are used to create glitter effects in colors, lithium is used for red, aluminum is used for white, strontium is used for purple, copper is used for blue, and barium nitrate is used for green. Furthermore, because environmental agents do not have the same capacity to metabolize and flush as adults, these crackers inflict greater harm to younger children than to adults.

There’s nothing wrong with having a good time with fireworks. However, if it is excessive, it pollutes the environment. It resulted in significant air pollution in a short period of time, with metal particles, hazardous poisons, toxic chemicals, and smoke remaining in the air for hours or days. Some toxins never entirely dissolve or disintegrate, instead of remaining in the environment and harming everything they come into touch with. Coughing, wheezing, shortness of breath, asthma episodes, and even heart attacks have all been related to fine particle exposure, such as that seen in smoke and haze.

Many of the raw materials required to make pyrotechnics are mined from mountains, resulting in the destruction of forests and wildlife habitats. Rock is thrown into valleys, obstructing and contaminating running streams. Hazardous gases such as nitrous oxide released by firecrackers linger in the air until there is no shock or significant destruction. When such gases are present in the air, we are more likely to breathe in the air when inhaling, increasing the risk of asthma attacks in those who suffer from it. People with a weakened immune system, as well as cardiac patients and those with chronic bronchitis, are at higher risk.

In reality, sweets are historically exchanged among family and friends to commemorate special occasions. Much later, crackers were used, resulting in ear-piercing sounds, stifling smoke, never-ending dirt, and, most significantly, perpetual pollution. Environmental pollution is still a problem in developing countries like ours, and there appears to be no way out. It is therefore unsurprising that during the time of the event, pollution levels reach 30 percent. It has been calculated that the compound strontium in the air increases by 120 times for every hour of firework display (it is safe in tiny amounts, but in bigger numbers, it does a lot of damage to our bones and can even lead to blood clotting issues).

A firework is essentially a tiny pyrotechnic missile that explodes in a precise manner, producing loud booms and bursts of vividly colored light. But all those beautifully colored explosions are only the beginning of the problem. Professional-grade pyrotechnics are constructed of biodegradable paper, so no compounds or chemicals are released into the atmosphere.  The city of Sydney acquires carbon offsets to compensate for any residual pollution from the fireworks show, ensuring a zero-carbon celebration. Clean and renewable energy initiatives that assist reduce greenhouse gas emissions are supported with carbon offsets.

Crackers, in addition to polluting the air and making a mess, also make a mess and make the scene appear unappealing. Now is the moment for us to reconsider our acts and attempt to cope with them; otherwise, life on Earth will come to an end, and if all human species survive, existence will be reduced to a collection of medical problems. Actions should be taken to express the festival’s delight. For this reason, setting off firecrackers is never an indication of a cheerful mentality. Because there is a facility to play firecrackers, the number has been raised. There are also firecrackers that generate a lot of noise and are harmful to the hearing.

There are, however, many fantastic, exciting, and eco-friendly alternatives to fireworks displays. Some fantastic ideas include going to a concert or hiking, celebrating beneath the stars on a beach or mountainside, or simply staying at home with good music and good company. The most serious danger posed by firecrackers is pollution, but young children’s organs are so delicate that contact with firecrackers can cause harm to their eyes, skin, and ears. Children will be obstinate if grownups play with firecrackers! As a result, it is necessary for elderly individuals to act responsibly.

Firecrackers also include heavy metals that are toxic to the human body, and at a time when our country is dealing with the issue of global warming and climate change, it is critical for us to understand what greenhouse gases firecrackers create, which include ozone and carbon dioxide (C02). To offset the 60,000 tons of carbon released each day, it would require the whole life span of approximately 5,000 trees. One of the primary pollutants that might cause an imbalance between human health and the environment is air pollution and noise pollution. Humans are very sensitive creatures. Its sensitivity has the potential to save civilization from pollution.

So, starting today, let’s vow to only use regulated and proportionate, non-loud firecrackers, and to avoid exploding firecrackers if at all feasible.

I, therefore, request everyone to assist our government in enforcing the prohibition on the use of firecrackers; only then can our presence on this planet be beneficial and worthwhile.

Also, many thanks to you and everyone else who is here. It was a pleasure to speak with you.

This is all I have to say today. Thank you all.