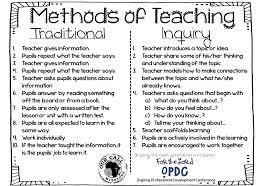 How Do Teaching  Methods  Differ?

The reason there are different methods of teaching is that there are different basic assumptions or theories about what is the most effective way to motivate students (the use of effort-producing stimuli ) and different basic assumptions about the most effective way to bring about a particular learning outcome (the use of outcome-shaping stimuli).

Western educational writers have advocated five fundamentally different approaches to teaching, three of which were developed before or during the   Greco-Roman period and the last two of which were formulated since 1750 as given below:

Telling / Showing Method: Typical examples of the outcome-shaping techniques employed by teachers when they use the Telling/Showing Method are lecturing, presenting films and slides, performing a scientific experiment in front of a class, and taking students on a field trip.  Plato recognized the pervasiveness of the Telling Method. (idib:6)

Exercise / Imitation Method: Whereas the Telling / Showing Method requires minimum active involvement on the part of the student, the opposite is true of the Exercise / Imitation Method.             The view of the learning process underlying this method is that the student must be relatively active in order to learn that he must put forth considerable effort. Learning is assumed to increase gradually through practice. As in the case of the Telling / Showing Method, this method makes use of pre-response outcome-shaping stimuli and overtly provided, aversive effort-producing stimuli. (idib:8)

Discovery / Restructuring Method: Teaching techniques that are normally associated with the use of Discovery /Restructuring Method including the technique of student teacher discussions. Probably the best known example of the use of this technique during the Greco-Roman period is found in the so-called “Socratic Method.” In this approach the teacher asks probable questions, first to bring the student to a realization that what he knew previously he does not really know, and then to make the student discover “new” knowledge that somehow was already latent within him. (idib:13)

Reinforcement Method: The Reinforcement Method, which is itself a twentieth century development in instructional method, has been popularized in two major forms: “programmed instruction” and “behavior modification.” Programmed instruction provides the student (by means of a mechanical device or book) with a specially arranged sequence of material to be learned. While the behavior modification approach, in its classroom application, utilizes the teacher as the dispenser of reinforcement. The key to this technique is that the teacher must be aware of the nature of the reinforcement process and act accordingly. Thus approved student behaviors may be rewarded by appropriate words, gestures, tokens, and prizes, while non-approved behaviors are not recognized. (idib:119-120)

How to Teach Students to Write in English