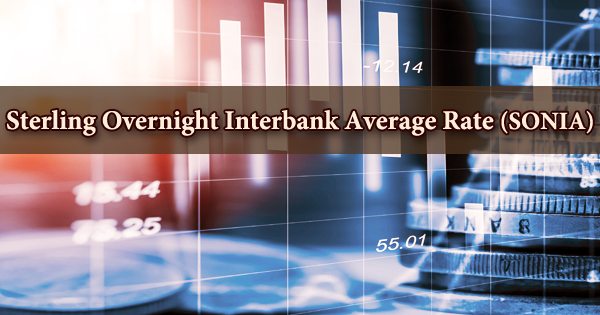 The Sterling Overnight Interbank Average Rate (SONIA) is the effective overnight interest rate paid by banks on unsecured loans in British sterling. It indicates the depth of nighttime activity in the marketplace and is utilized for overnight funding for deals that occur during off-hours. The SONIA is a risk-free rate in and of itself. Because it does not include any credit risk associated with the London Interbank Offered Rate, SONIA provides an alternative benchmark interest rate for financial contracts for traders (LIBOR). LIBOR is used as a reference rate in a variety of financial products, including wholesale and retail, as well as in related processes like valuation and accounting models.

SONIA is a U.K. financial institution-to-financial-institutions indicator of extremely short-term unsecured loans. It was created by WMBA Limited in March 1997 and is supported by the British Bankers Association (BBA). In April 2016, the Bank of England took over rate management. The rate received a series of modifications two years later, in April 2018. SONIA was promoted as the standard Sterling interest rate benchmark for loans, derivatives, and bonds throughout the same year.

SONIA was redesigned in 2018 and presented as an alternative to the London interbank offered rate (LIBOR) as a benchmark rate. National Express, a UK transport company, received the first corporate loan mentioning SONIA in July 2019. The loan was obtained through NatWest as part of a trial program before being made available to the general public. The Bank of England began calculating and releasing SONIA every day on any London business day that is not a holiday on August 3, 2020. The overnight rates on the British financial market have been stable since its inception.

SONIA is a widely utilized benchmark for a variety of transactions, including the sterling Overnight Indexed Swap market’s reference rate. SONIA is calculated as the trimmed mean, rounded to four decimal places, of interest rates paid on qualifying sterling-denominated deposit transactions on each London business day. The volume-weighted mean rate, based on the center 50% of the volume-weighted distribution of rates, is used to compute the trimmed mean. In most cases, SONIA has essentially supplanted LIBOR as the benchmark rate. The absence of activity that casts doubt on LIBOR’s viability as a benchmark rate just adds to the argument.

Prior to SONIA, the UK utilized LIBOR as a daily interest rate benchmark for loans and financial transactions. It was determined by asking 35 banks from across the world to respond to a survey about the rates at which they would make short-term loans to one another. Secured interbank borrowing, which serves as the foundation for LIBOR among financial institutions, has also fallen significantly. The tendency has been bolstered by the post-crisis liquidity situation, which classifies interbank borrowing as risky.

The Bank of England (BoE) is in charge of running the SONIA benchmark. The Wholesale Markets Brokers’ Association is regulated by the Financial Conduct Authority (FCA) as a calculating and publication agency. SONIA is a UK-centric index, whereas LIBOR was a global benchmark. The US dollar, euro, British pound, Japanese yen, and Swiss franc were used to determine the total. The benchmark for discounting sterling rates and Sterling Overnight Indexed Swaps (OIS) is already the Sterling Overnight Interbank Average Rate.

Dissimilar to LIBOR, the SONIA benchmark is determined utilizing real exchanges, as opposed to overview results. This implies that it mirrors the normal pace of exchanges as well as that there is less danger of the rate being controlled. SONIA will assist with giving straightforwardness inside the market. SONIA currently mirrors a wide scope of extent of unstable stores. The Bank of England believes that the new benchmark accounts for roughly GBP50 billion worth of financial transactions each day, based on the revised methodology. The sum is three times that of LIBOR-recorded financial contracts.

With that in mind, the U.K’s. Financial Conduct Authority reported it would at this point don’t expect banks to submit LIBOR cites after the year 2021. While LIBOR will keep on existing from that point forward, its suitability as a source of the perspective rate will probably be abridged. As a general rule, interbank markets empower banks to give loaning and store offices by pooling, overseeing, and rearranging reserves. One of the most significant interbank marketplaces is the overnight market. In line with the current edition of the ‘Reporting Instructions for Form SMMD,’ reported to the Bank’s Sterling Money Market daily data collection.

Banks are urged to use SONIA as a LIBOR substitute. The call is predicated on the assumption that SONIA is a risk-free rate of interest. Another issue regarding SONIA, or the move away from LIBOR, is that the group of five currencies will not be perfectly linked. The benchmarks, on the other hand, will have to adhere to international rules, which will help to bring the rates closer together globally. British pound derivatives and other related financial transactions have been influenced by this move. It has also taken the place of the widely used LIBOR as the best choice, resulting in a new interest rate.