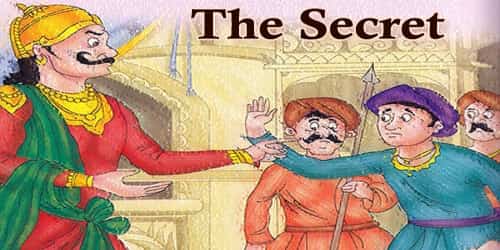 Once, a farmer was plowing his field when suddenly his pick-ax hit something under the ground. “Clink!” came the sound. “What could it be?” the farmer wondered.

He carefully dug up the ground and was amazed to see two big pots full of gold coins buried there. “So much wealth!” the farmer cried with joy. He had never seen so much treasure.

He decided to take it home before anybody else saw it. “But that won’t be a good idea!” he thought. He feared his talkative wife may spread the news around. “Once the people come to know about it, they will be after me!” thought the farmer. He was in a dilemma; neither could he leave the treasure there, nor could he take it home.

The news spread. And spreading fast, the news finally reached the palace to the king himself. The king was very upset and asked one of his courtiers to find out who had been spreading the rumor.

The king sent his guards to bring the farmer. When the farmer saw the king’s guards, he knew his wife had been talking. “What a fool I’ve been to ask my wife to keep a secret. Now I will have to pay for my foolishness,” he thought.

The farmer was produced before the king. “Why did you spread such a silly rumor about me?” asked the king, who was very angry. “Tell me or I shall have you beheaded!”

The farmer was terribly frightened. He decided to tell the truth, “This is the only way I can get away alive,” he thought.

“Speak up!” shouted the king. “Why did you spread the rumor?” “I didn’t spread the rumor, Your Majesty!” the farmer replied softly. “It was my wife who did it!” “What do you mean?” asked the king. The farmer said, “I wanted to test whether my wife could keep a secret or not. And so I…..” “What secret?” the king interrupted.

“That I have found two pots full of gold coins!” replied the farmer. “Two pots of gold coins!” the king exclaimed. “Where?” Now the farmer knew that once he showed the pots to the king, he would get only a meager sum as a reward. So, he replied, “I will tell you where it is, your Majesty, but first you must promise me that you will let me take half of it.”

“I promise!” said the king. The farmer then took the king to his field and showed him the treasure. “You deserve to keep both pots for speaking the truth, dear farmer,” said the king.

The farmer was very happy to hear this; he thanked the king and carried his treasure home. Now he had no need to keep it a secret.