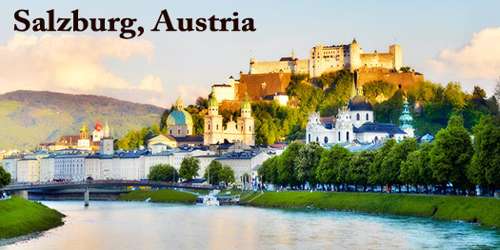 Salzburg is situated in a level basin on both sides of the Salzach River near the northern foothills of the Alps and the Bavarian (German) border. The historic center of the city, with its rich mix of art and architecture, was added to the UNESCO World Heritage List in 1996.

The town is located on the site of the former Roman settlement of Iuvavum. Salzburg was founded as an episcopal see in 696 and became a seat of the archbishop in 798. Its main sources of income were salt extraction and trade and, at times, gold mining. The fortress of Hohensalzburg, one of the largest medieval fortresses in Europe, dates from the 11th century. In the 17th century, Salzburg became a center of the Counter-Reformation, where monasteries and numerous Baroque churches were built.

Music lovers definitely need to have Salzburg on their list of the best places to visit in Europe because not only is it the birthplace of Mozart, but it’s also where The Sound of Music was filmed. When it’s time for dinner, Salzburg satisfies everyone from the carb-lover to the gluten-free eater as top of the line restaurants are scattered throughout the city.

Salzburg’s historic center (German: Altstadt) is thus renowned for its Baroque architecture and is one of the best-preserved city centers north of the Alps, with 27 churches. The city has three universities and a large population of students. Tourists also visit Salzburg to tour the historic center and the scenic Alpine surroundings. Salzburg was the birthplace of the 18th-century composer Wolfgang Amadeus Mozart. Because of its history, culture, and attractions, Salzburg has been labeled Austria’s “most inspiring city.” 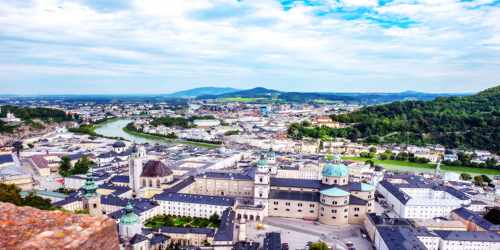 History – Salzburg′s long history can be traced back to the stone age – but only in the Middle Ages and more so in Baroque times it got really exciting! The first signs of settlements within today′s city limit date as far back as to Neolithic times. However, the first actual city that merged smaller Celtic communities was founded by Romans in 15 BC and named Iuvavum. After the Roman Empire came to decay, Iuvavum was abandoned and fell into ruins.

A monastery is documented from the 5th century, but it wasn′t until St. Rupert received the ruins as a present in 699 AD from the Duke of Bavaria that the city went uphill. Rupert became the city′s bishop, launched St. Peter′s Abbey, and is until today the patron saint of Salzburg.

About 700 CE the Benedictine Abbey of St. Peter and the Nonnberg Nunnery were founded there by St. Rupert. Salzburg was made a bishopric by St. Boniface in 739 and was raised to an archbishopric in 798. Its archbishops were acknowledged as princes of the Holy Roman Empire in 1278, and the city became the seat of their powerful ecclesiastical principality. Among the most notable of the prince-archbishops were Wolf Dietrich von Raitenau (reigned 1587–1612), who brought Italian Renaissance architecture and styles to the city, notably by offering commissions to the Italian architect Vincenzo Scamozzi for public squares, a cathedral, and other buildings; Markus Sittikus von Hohenems (reigned 1612–19), who continued to rebuild the city with another Italian architect, Santino Solari; Paris, Graf (count) von Lodron (reigned 1619–53), who founded the city’s university (1622); and Leopold Anton von Firmian (reigned 1727–44).

In 1772–1803, under archbishop Hieronymus Graf von Colloredo, Salzburg was a center of late Illuminism. Colloredo is known for being one of the main employers of Mozart. He often had several arguments with Mozart he dismissed him by saying, “Soll er doch gehen, ich brauche ihn night!” (He should just go then; I don’t need him!) Mozart would leave Salzburg for Vienna in 1781 with his family including his father Leopold staying back as he and Colloredo had a close relationship.

After 1803 the Prince Archbishops lose their secular power in the course of the Napoleonic Wars, and Salzburg becomes part of different provinces before it is finally finding its way into the Austrian Empire. There it remains rather quietly, only slowly recovering during the 19th century from the French and Bavarian lootings.

A unique combination of scenic Alpine landscape and architectural richness has led to Salzburg’s reputation as one of the world’s most beautiful cities. Because of the building activities of its later archbishops, however, little remains of its medieval architecture, and several buildings were damaged or destroyed by fire in 1818. Its chief glories are the episcopal buildings and the burghers’ houses, displaying an Italian Renaissance and Baroque influence that earned Salzburg the designation of the “German Rome.”

After World War I the Austrian Empire splits. Salzburg Festival is founded in 1920. Salzburg becomes a fashionable place to be in the summer and attracts wealthy people and intellectuals from Vienna and Germany, mostly through the young Salzburg Festival. However, the First Republic is politically and economically instable and in 1938 all of Austria becomes part of Nazi Germany. In the same year, book burnings are held on public square Residenzplatz, persecutions of Jews, and other Nazi-victims start. In November, a synagogue is destroyed.

During World War II, a total of 15 airstrikes destroyed 46 percent of the city’s ′s buildings, especially around the station. Up to the present day, duds and bombshells are occasionally found in Salzburg. Watch out for some of Salzburg′s not-so-nice neighborhoods around the station area: they are some of the scars of WWII.

After World War II, Salzburg became the capital city of the Federal State of Salzburg (Land Salzburg). On 27 January 2006, the 250th anniversary of the birth of Wolfgang Amadeus Mozart, all 35 churches of Salzburg rang their bells after 8:00 p.m. (local time) to celebrate the occasion. Major celebrations took place throughout the year.

As of 2017, Salzburg had a GDP per capita of €46,100, which was greater than the average for Austria and for most European countries. 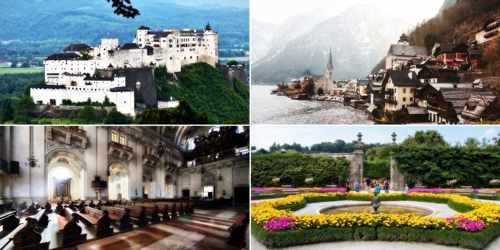 Geography and Sites of Salzburg –

Salzburg is on the banks of the River Salzach, at the northern boundary of the Alps. The mountains to Salzburg’s south contrast with the rolling plains to the north. The closest alpine peak, the 1,972‑metre-high Untersberg, is less than 16 kilometers (10 miles) from the city center. The Altstadt, or “old town”, is dominated by its baroque towers and churches and the massive Hohensalzburg Fortress. This area is flanked by two smaller hills, the Mönchsberg and Kapuzinerberg, which offer green relief within the city. Salzburg is approximately 150 km (93 mi) east of Munich, 281 km (175 mi) northwest of Ljubljana, Slovenia, and 300 km (186 mi) west of Vienna. Salzburg has about the same latitude of Seattle.

Salzburg is part of the temperate zone. The Köppen climate classification specifies the climate as a humid continental climate (Dfb), however, with the −3 °C (27 °F) isotherm for the coldest month, Salzburg can be classified as having four-season oceanic climate with significant temperature differences between seasons. Due to the location at the northern rim of the Alps, the amount of precipitation is comparatively high, mainly in the summer months. The specific drizzle is called Schnürlregen in the local dialect. In winter and spring, pronounced foehn winds regularly occur.

In the center of the “older town,” on the left bank of the Salzach, is the Residenzplatz with the archbishop’s residence (1595–1619), a gallery of 16th–19th-century European paintings, and a large Baroque fountain (1658–61). The opposite is the Residenz Neugebäude (Residence New Building; 1592–1602); its tower contains clockwork (1873) and carillon (German: Glockenspiel; 1705) that was imported from Antwerp, Belgium. The 35 bells that make up the carillon range in size from 35 pounds (16 kg) to 838 pounds (380 kg) and play many pieces specially composed by Michael Haydn and by Wolfgang Amadeus Mozart, Salzburg’s most famous native son. The cathedral, or Dom, was the first church built in the Italian style on German soil, according to plans elaborated in 1614–28. It was constructed on the site of a previous Romanesque cathedral (1181–1200; damaged by fire 1598) and an earlier, 8th-century basilica.

Salzburg is a tourist favorite, with the number of visitors outnumbering locals by a large margin in peak times. Outside the Old Town –

A music center for centuries, Salzburg was the birthplace of Mozart, whose house, No. 9 Getreidegasse, is preserved as a museum. It is also the site of the internationally renowned annual Salzburg Festival. There were music festivals in Salzburg at irregular intervals throughout the 19th century, and in 1917 Hugo von Hofmannsthal, Richard Strauss, and Max Reinhardt founded the Festival Theatre Committee, which mounted a festival at Salzburg on an annual basis. The Salzburg Festival now comprises recitals, concerts of orchestral and chamber music, church music, opera, and drama. The music of Mozart dominates the festival. The Festspielhaus (Festival Theatre), converted from the court stables built into the cliff of Monks’ Hill, consists of the Rock Riding School (1693), an auditorium for open-air performances; two large indoor opera houses (1926, 1960); and the Winter Riding School, used as a reception hall.

Salzburg suffered relatively little damage during World War II and was the headquarters of the U.S. military forces in Austria from 1945 to 1956. Today Salzburg is the northwestern gateway to Austria and is an important road and rail junction with an international airport at Maxglan. It is one of Austria’s chief tourist resorts and an international conference center. The city has large breweries; its manufactures include musical instruments, hardware, textiles, and leather.

With picturesque views of the Eastern Alps, it has proven to be a nature-lover’s dream as well, as there are so many hikes and walks that visitors could never possibly do them all in one trip. After experiencing all that Salzburg has to offer, they are sure to leave with a smile on their face and a song in their heart. 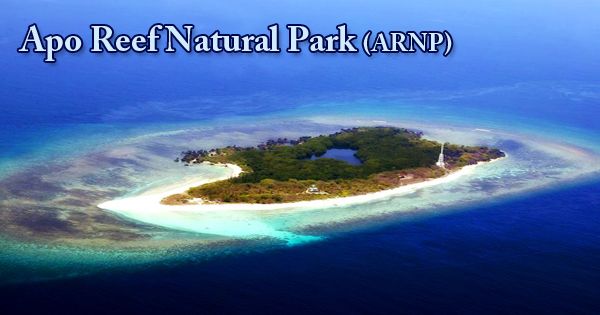 Define and Discuss on Stream Deposition