Home Arts Law Rights of a Hindu Woman in Bangladesh 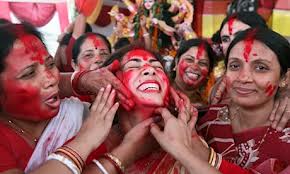 Property right of a Hindu woman

Right of a Hindu widow

When the husband has no son the widow gets the husband’s property inherently. In this way she owns the promissory right over the whole property .But she becomes owner of the property for her life term only. Grossly she has no right to sell but for grave necessity  she can sell minimum portion.

Right of a Hindu mother

A mother as well as a widow in Hindu community has right to claim a share of property of their sons. According to the section 18 of Hindu Act, 1937 a widow mother gets her husband’s share of property inherently. She is also a heir of the property with her son. She is entitled to get an equal share of her sons.

A Hindu mother gets her dead son’s property inherently like her son’s son but that property is not treated as striedhana.

Right of a Hindu daughter

The unmarried daughter takes one-fourth share and the son take the remaining three fourths in the case of the property being small.[14]

Finally, A Hindu woman has limited title over her husband’s property. She becomes the owner of the property for enjoyment in her life time only. After her death the property goes to her husband heirs.

According to the Hindu law is body for the performance of religious duties. It is deemed as a holy union in Hindu law. It is also considered to be a union of flash and flash and blood and blood. It is religious sacrament and not a civil contract.[15] According to Hari Shing Gour :

“A marriage is an alliance between a man and woman recognized by a law .It is sometimes defined as the act ceremony or process by which the relationship of husband and wife is constituted. It is to be pointed out that the meaning of marriage in different countries.”

The ancient Hindu law recognized four forms of marriage which are approved and another four and unapproved fours.

In the accordance of Manu, the gift of a daughter after decking her with clonally garments and honoring her by presence of jewels to a man learned in the veda and of good conduct whom the father himself has invited is called the Brahma rite

In the Brahma marriage the marriage took the form of gift the bride to bridegroom who is versed in the Vedas and is of good character. So when the guardian of the bride gives the bride in marriage without receiving any consideration from the bridegroom for the girl in marriage this marriage is called Bharma. Now this type of marriage takes place within the all caste of Hindu.

It amounted to a sale of the bride. Here the bride’s price is the consideration for the gift by the father of the daughter in marriage. So when consideration is received it is called Asura

Essential part of   a marriage

Under the Hindu law two ceremonies are essential for the validity of a Hindu marriage:

(1)   Invocation before the sacred fire and

(2)   Saptapadi, that is the taking of sever steps by the bridegroom and the bride jointly before the sacred fire.

The marriage becomes completed when the seventh step is taken till then it is imperfect and revocable. Consummation is not necessary to make a marriage .But it is to be noted than no religious ceremonies are necessary in the case of marriage of widow.

The mere exchange of garlands does not constitute a valid marriage. It has been reported in the following Bangladeshi case.

Amulya Chandra Modak v. The state[16]  In this case  appellant brought a case one appeal against the decision of the assistant session judge, second court, Mymansingh under section 493 of the Penal code 1860 sentenced to suffer rigorous imprisonment for five years and a thousand taka fine prosecution case kalpana rani age 18 years old was induced into believing that she was married to the appellant on the ground that they secretly exchanged garlands and thereby she consented to cohabit with the appellant and she become pregnant. The accused appellant pleaded not guilty to deceit by saying that various facts were false. The learned judges opined that kalpana rani was matured enough to understand that various rites like viva homa and saptapadineed to be performed which were not performed. Also according to the judges it is customarily among in Bangladesh Hindu’s of all castes that some relations remain presence and the bride is made to put on new clause bangles and vermillian mark on forehead .Kalpana could not have believed according to the judges that while by mere exchange of garlands the accused become her lawfully married husband. The court acquitted the appellant from the charge of deceit.

Where it is proved that a marriage was performed, the court will presume this: (1) It is valid in law, (2) The necessary ceremonies has been performed, and (3)It continued during the life time of either party.

Abdur Rahman v Upendar Narayan Majumdar[17]  In this case it has held that there is a presumption of marriage rather than anything else when a man and woman are proved to live together as husband and wife the laws presume unless contrary is clearly proved that they are leaving together as a consequence of a valid marriage.

No marriage is valid it is made between person related to each other within the prohibited degrees unless such marriage is sanctioned by custom.

The following are the rules regarding prohibited degrees

(1)According to the Hindu marriage Disabilities Removal Act 1946 marriage between parties belonging to the same gotra or pravara was invalid. After this Act such marriage was validated.

(2)A man can not marry a girl of same gotra or pravara. This rule does not apply to sudra as the sudra have no gotra of their own.

(a)    If she is within 7th degree in descent from his father or from one of his father’s six ancestor in the male line.

(c) If she is within the 7th degree in descent from his father’s three technical bandhus or from one of their six ancestors through whom the girl is related to him.

Explanation: A girl, though related within the degrees mentioned above may be taken in marriage if she is removed by three gotres from him.

Relationship by marriage is not by itself an important to marriage. Thus a man may marry the daughter of her wife’s sister.

But leaders of Hindu have different views.  They think marriage registration is unnecessary for Hindu people. Because Hindu boy in single marriage and the number of those who go for polygamy is very few. The leaders say Hindu woman will be repressed more if marriage registration and divorce law are enacted.

The concept of dower is not recognized by Hindu law.  The Vedas prescribe that a dowry be given by the bride’s family to the groom. The Rig Vada states that cows and gift by the  father of the bride to  the  daughter  accompanied  the  brides  procession.  Kakshivat says he become rich by the   father-in-law giving him 10 chariots and minds and 1060 cows during the marriage ceremony.  The ancient custom of  kanyadan,  Where  the father present his daughter with jewelry and clothes at the time of her marriage , and vardakshina where the presented the groom with kith and kin are, in essence the dowry system.

The concept of divorce is not recognized under the orthodox Hindu law. Manu believed that the duty of a wife continues even after death. She can never have a second husband .The reason is that a marriage from the Hindu point of view creates an indissoluble tie between husband and wife. Unless divorce is allowed by the custom neither the party. Even the conversion to another faith or desertion does not affect the dissolution of marriage in Hindu law.

The position of Hindu woman is almost identical in the matter of maintenance.  On marriage the wife passes in to the dominion of her husband and thereafter lives under his protection .Thus he is under the liability to maintain his wife independent of his possession of property.

Matilal Sarcar & others v. Brajabashi Biswas  & other[18]  In this case it is held that under the Hindu law daughter on marriage cases to be member of  her father’s family and becomes a member of her  husband’s family and she is entitled to be maintained by her husband  after the husband’s  death out of the husband’s estate but if the husband leaves no estate then her father-in-law if he has no sufficient property of his morally, though not legally bound to maintained her but after his death she  acquires a legal right to maintained out of his estate.

Now the most interest think is that if a father changes his religion he will not lose custody of his child but a mother does upon her religious conversion the child should be removed from her custody if she changes her religion. A mother loses her preferential right to the guardianship of the children of her first marriage, except where such remarriage is permitted by custom. But nothing either in the Hindu law or in statutory law makes it obligatory on a court to remove her from that position.

Perm  Kaur  v. Harnan[19]  It was held that where  a  widow  mother  might  remarry  by  custom  irrespective  of  the Hindu  Widow’s  Remarriage  Act  1856  the  mother  did  not  by  her remarriage forfeit the guardianship of her children. All remarriage authorized by this Act deprived mothers of their natural guardianship although they might be proper persons to be appointed guardians  her too courts have assessed the best interests of the chill in determining guardianship.

What is Humanitarian Law?

Discuss on Legal Elements of Crime