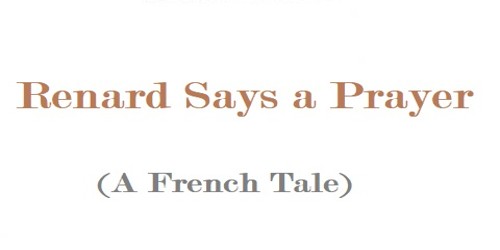 You’ve probably heard the tales of Renard, the sly fox who loved food and who also loved to play tricks on others, especially on his old friend Wolf. He outwitted hounds and cats and hens and roosters, and then one day the king declared Renard an outlaw and offered a reward for his capture, dead or alive.

Renard did not like this one bit. He scampered to the top of a snowy hill and looked up at the icy sky. “Dear God,” he prayed, “forgive me for all my tricks and do me one favor. Disguise me so that nobody will know who I am. Thanks in advance. Amen.”

Renard bowed and set off in search of something to eat. He couldn’t find a thing in the frozen forest, and so he trotted into the village.

Suddenly Renard’s face lit up, for he noticed an open window. He peeked inside, saw the coast was clear and jumped inside.

Just beneath that window sat a vat of yellow dye, and Renard landed right in it. He sank to the bottom. When he bobbed up, he splashed and thrashed and tried to keep from drowning. You see, Renard had never learned to swim.

Just then the dyer came in. When he spotted Renard in his new vat of dye, he lifted his measuring stick. “How dare you ruin my dye!” he cried, prepared to strike.

“Sir,” Renard sputtered, “don’t hit me. I’ve come to share the latest dyeing fashion with you. You do know the newest way to mix, don’t you?”

“No,” said the dyer, lowering his stick.

“Ahh,” said Renard, clutching the side of the vat. “I’ve just mixed your dye in the new Parisian fashion. If you’ll help me out, I’ll tell you the secret.” Renard held out his paw, and the dyer helped him out of the tub.

When Renard was on dry ground, he laughed. “I know nothing about dye, but I do know you shouldn’t trust a fox.” With that, he jumped out the window.

Outside Renard looked down and saw that he was as yellow as the bright winter sun. He loved his disguise! With lifted spirits, he set off again in search of food. Before long he came upon Wolf. “Oh no,” Renard said to himself, for he had tricked Wolf one too many times, and knew that Wolf would turn him into the king.

Renard grinned, for he realized Wolf had no idea who he was. Disguising his voice with an English accent, he bowed. “I am a visitor to your country. Sadly, I have just been robbed.”

“Ah!” Wolf said, “it must have been Renard. What did he steal from you?”

“Everything,” said Renard. “He stole my food and my guitar. I was supposed to go to play for the king.”

“The finest in England,” Renard said.

Now Wolf was always eager to please the king. “I know where we can find a guitar,” he said, and led Renard back into town, stopping just outside a big, fancy house.

“There’s a guitar in there,” Wolf said, “and just our luck, a window is open.” He had spied a window popped up with a stick. “They have a terrible mastiff in there, but if I tiptoe, he’ll never hear me. You wait here and I shall return.”

Wolf slipped inside, crept across the floor and unhooked the guitar from the wall. Just as quietly, he crept back to the window and handed the guitar to Renard.

Now Renard had a gleam in his eye, for he had a trick up his sleeve. He slung the guitar over his shoulder so he looked like a real minstrel. Then, with a laugh, he knocked the stick away. The window slammed shut.

The bang woke the mastiff, who saw the Wolf and bounded toward him, barking loudly as he ran. That woke the whole household, and when they spied Wolf, they began to chase him. Renard opened the door, and Wolf ran as fast as he could outside and through the snow. The people chased after him, calling, “Catch that thief!” and soon all the neighbors were running after Wolf, carrying their brooms and rakes and shovels.

Now Renard smiled a big smile. He slipped inside the empty house and ate everything he could find. He ate ham and cakes and fruit and cheese and a fat, juicy sausage. When he was full, he danced out of the house and slipped to a spot in the forest.

There, beneath the bright white moon, Renard strummed the guitar and sang.

When the sun rose next morning, Renard, as yellow as that sun, said a little prayer once more. “Dear Lord in heaven, thanks for answering my prayers. Amen.”