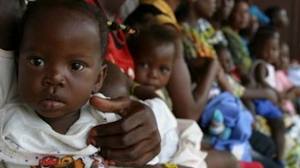 This was success borne on many wings vaccination programs, the spread of oral rehydration therapy, wider availability of antibiotics to treat pneumonia, and better economic and social conditions all contributed.

South Asia, with the lowest GNI per capita of any region, has the largest number of people living on less than $1 a day. But since 1990 it has experienced rapid growth, averaging 5.6 percent a year, which has helped to reduce the poverty rate substantially. The ability of the region, especially India, to sustain average growth of 5-6 percent a year will be critical to achieving the poverty reduction targets for 2015.

Poverty data in India are subject to considerable uncertainty. Its private consumption, as measured in the national accounts, grew about three times faster in the 1990s than household consumption, as measured by the National Sample Survey. Discrepancies are to be expected, as the two sources track different aggregates. Moreover, the survey data tend to understate the consumption of higher-income households. But the size of this difference and the slowness of poverty reduction revealed in the survey data are difficult to account for, particularly given the improvement in human development indicators, so more accurate data could indicate faster poverty reductions than our current estimates.

The region has had some success in reducing mortality in children under five since 1990 (from 120 to 96, per 1,000), especially in Bangladesh (136 to 83, per 1,000). At the same time, little progress has been made in reducing malnutrition. Today, nearly half of all children under the age of five are malnourished. It also has the highest rate of youth illiteracy―23 percent for males and 40 percent for females―and, at 37 percent, the lowest rate of access to sanitation facilities. The resurgence of tuberculosis and the threat of HIV/AIDS are also a cause for concern.

Discuss Pros and Cons of Bureaucracy